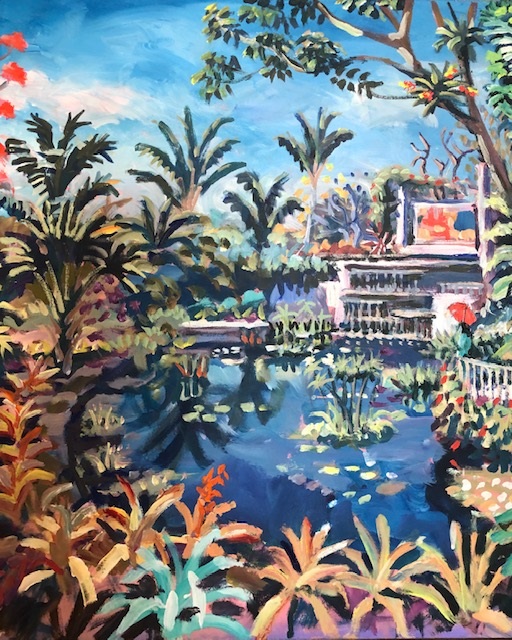 Naples Botanical Garden has been a part of Arsenault’s career for over 20 years. It’s a place he visits over and over again to find inspiration. In celebration of the Garden’s 10th Anniversary and his journey alongside the beloved community treasure, he set out to do what he’s done in places all over the world. That is, capture its essence.

This monumental mural is made up of ten panels, each measuring 6-feet high by 4-feet wide and took Arsenault six months to create. Two panels are dedicated to each of the five main gardens: the Smith Children’s Garden, the Kapnick Brazilian Garden, the Kapnick Caribbean Garden, the Scott Florida Garden, and the Lea Asian Garden, with a nod to the Smith River of Grass which acts as the “backbone” of the Garden’s 170-acre site. Look closely and you can see how he designed the sections to flow seamlessly from one to the next by painting elements that visually connect each panel. By doing this, he creates a continuous, near panoramic view of the entire Garden.

For this series, Arsenault sought to find unique and interesting perspectives that highlighted what is special about each garden, to try and tell its story. In the Children’s Garden, Arsenault placed the emphasis on capturing the whimsical feeling, with a hint of water to represent the Garden’s proximity to Naples Bay and the Gulf of Mexico. In the Brazilian Garden, he shows off the magnificent, bright colors and richness in the tropical foliage. An emphasis on agriculture, juxtaposed with the dry, arid palm-filled landscape captures the Caribbean Garden’s essence, while the Water Garden’s colorful blooms take the viewer’s eye toward the River of Grass. In the Florida Garden, Arsenault depicts the large chickee from below, a unique perspective which he captured standing near the Labyrinth, the palms proudly towering above. Iconic symbols in the Asian Garden—the Thai Pavilion and the Balinese Shrine—capture that garden’s essence.

“To be witness to such a successful community endeavor is just exciting. It means so much to be able to express my feeling for and love for the Garden and how it should be appreciated and honored. That’s why I want to make (this exhibit) a very important part of my art and my career. This is a major piece for me.” – Paul Arsenault