From Bloom to Bean

Vanilla orchids are a favorite talking point in the Garden, but not always the easiest show-and-tell. Their vines snake up trees, blending into foliage, and their blooms often appear up high and out of sight.

No longer. Our Horticulture and Operations teams have teamed up to bring these flowers, which produce the seed pods that make vanilla extract, down to eye level. In the Kapnick Caribbean Garden, behind the Pastore Caribbean House, you’ll find a set of trellises with slender Vanilla planifolia vines twisting through them. They’re individual strands now, but they’ll fill in like a hedge, a thicket of green that will produce greenish yellow flowers each spring.

Those flowers are where vanilla flavoring gets its start. Going from bloom to bean is a long and cumbersome process, which we’ll be able to show you more directly as the vines mature. It begins with hand pollinating the flowers each morning while they are blooming. Vanilla planifolia, the most commonly cultivated variety, originates in Central America, and its pollinators weren’t exported along with the vines. (You can learn all about vanilla’s origins and migration here.). 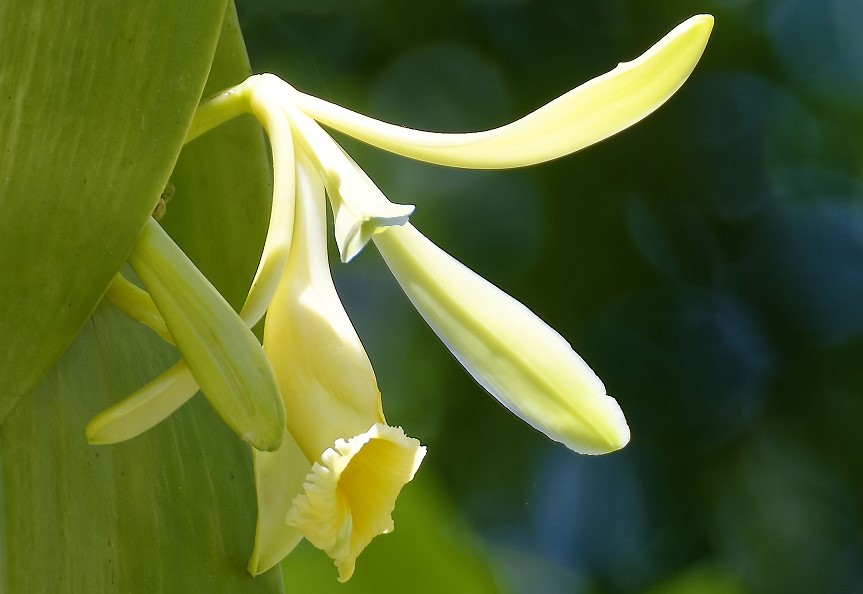 “They produce spikes that bloom sequentially,” explains Director of Collections Nick Ewy. “You’ll have one flower that opens up for a night, and then it closes down the next day, and that flower is done, and then the next day or a couple days later, there might be another flower that opens, and so there’s kind of a blooming period where you’re checking each day for flowers.”

If the orchid is successfully pollinated, it’ll produce string bean-looking seed pods that grow for eight to nine months. The pods are harvested, exposed to heat to kill the plant cells; placed in plastic bags and “sweated” at elevated temperatures for 24 to 48 hours; exposed to sunlight a few hours a day for 12 to 15 days; dried on trays for another 70 days; and conditioned over one to two months.

Now you know why a tiny bottle of extract fetches a big price! Vanilla is the world’s second-most expensive flavoring, behind saffron.

We’re currently growing V. planifolia, and Nick will plant another variety, V. x tahitensis, in the near future. They have slightly different flavor profiles. (Worldwide, there are about 108 species of vanilla orchids.) Eventually, the Horticulture Team hopes to supply Fogg Café with Garden-grown vanilla. There is, in fact, a push to make vanilla a commercial crop in Florida, led by University of Florida Assistant Professor Alan H. Chambers, a tropical fruit breeder. According to him, the United States is the world’s largest importer of vanilla beans, but domestic production is scant.

Although the Garden is not directly contributing to his research, Nick and the professor are in contact and considering some collaborations down the road.