This blog supports this year’s Intertwined theme, which explores the connections in the natural world and the bond between people and plants.

The term “extinction” often evokes thoughts of dinosaurs and woolly mammoths, species long distanced from the planet’s current inhabitants. But this term applies to many plants and animals in the present day as well. In the plant kingdom alone, scientists estimate that 140,000, or 39.4% of vascular plants — those with special tissues to transport nutrients and water such as trees, flowers, and ferns — are threatened with extinction. This number has risen dramatically since 2016 when just 21% of vascular plants were under threat.

Unfortunately, this statistic does not reflect the scale of the extinction crisis because extinction doesn’t happen in isolation. The loss of just a single plant or animal species has a cascading effect, potentially triggering other localized extinctions because ecological systems are deeply interconnected. These events don’t only take place in faraway places, like the high mountain terrain of the Caribbean or the dry deserts of the African Sahara. No, extinctions can happen in our own backyards.

Let’s look at a species right here in Southwest Florida that faces such a risk. The Palamedes swallowtail (Papilio palamedes) is a native Florida Lepidoptera. This butterfly’s larvae feed exclusively on red bay (Persea borbonia var. borbonia) and swamp bay (Persea palustris). These native trees are considered the host plant for this butterfly species and are in the Lauraceae family, a grouping that also includes a tasty favorite, the avocado (Persea americana).

Dolefully, plants in the Lauraceae family are under threat from laurel wilt disease, an aliment caused by the fungus Raffaellea lauricola. The fungus latches on to the ambrosia beetle (Xyleborus glabratus). The fungus doesn’t harm the beetle, but it causes serious damage to trees. When the beetle feeds on the host tree, its fungal sidekick also finds its way into the plant, inflicting a deadly vascular disease called “laurel wilt.” Laurel wilt has caused the loss of approximately 300 million redbays. Both the beetle and fungi were introduced accidentally to the United States and first recorded in 2002. (To learn more about the Garden’s swamp bay collection, the challenges with laurel wilt, and the potential use of swamp bay trees to protect the avocado industry, read this previous post in Notes from the Garden.)

Since the Palamedes swallowtail larvae rely exclusively on these bay species as a food source, a drop in the host plant population will most likely cause the butterfly population to decline or adapt. To adapt, the larvae would need to consume other plants in the Lauraceae family. This change in diet could negatively impact the caterpillar’s new host plant. These new hosts may not be adapted to handle hungry growing caterpillars, as caterpillars can defoliate a plant, making it very difficult for the plant to photosynthesize.

But the cascade does not stop there. About 24 other native insect species are dependent upon Lauraceae host plants, too, and a decline in bay would directly impact them. There are also numerous organisms that could be indirectly impacted, like predators of those dependent insect species. Some spider species, specifically garden spider (Argiope spp.), and golden silk orb-weaver (Trichonephila clavipes) feed on adult Palamedes swallowtail. These spiders are important as they keep agricultural pests, like grasshoppers, in check. Without this service, food crops would see a dramatic rise in pests, which could lead to scarcity or price increases.

As you see, a population change in just one organism can reverberate throughout the food web, affecting predator and prey species, plants and animals, far and wide. 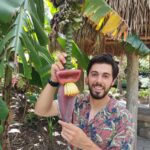 Joe Fagnano is an Educator I at Naples Botanical Garden. Joe earned his Bachelor of Science in biology from Youngstown State University (Youngstown, Ohio), where he focused his studies on animal and plant sciences.