Bees buzzing, butterflies fluttering, beetles scurrying, flies zipping, birds and bats flapping, all pollinating. Did those last few surprise you? While bees and butterflies are the most recognizable pollinators, they aren’t the only players. There is a multitude of pollinators that are unseen, unappreciated, and downright unusual, whose pollination work is just as important as their popular colleagues. 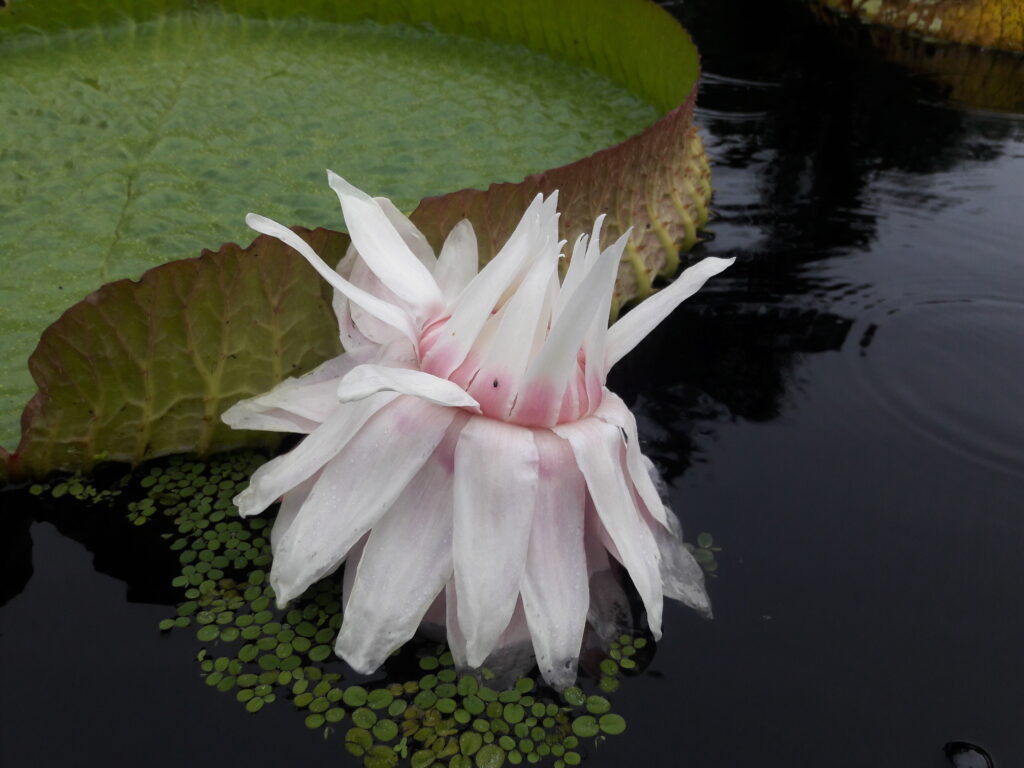 Beetles are an important pollinator for many plants, most notably our Victoria waterlilies. You can find these aquatic beauties in the Kapnick Brazilian Garden. They are native to the Amazon Basin and make spectacular flowers that bloom up to 1.5 feet in diameter. When the flowers open, the combination of the white color and fruity smell attracts scarab beetles from the genus Cyclocephala. As night falls, the flower closes, trapping the beetles inside. Don’t fret, the inside of the flower is covered in a spongy, starchy tissue that the beetles love to snack on. As the beetles happily munch, they unintentionally cover themselves in pollen. The flower remains closed throughout the next day and begins to turn a reddish pink color. Then, after 24 hours, the flower reopens and releases the pollen–slathered beetles who move on to their next meal from a new, white bloom. The pollen they bring to the new waterlily will rub on to the female part of the flower, the pistil, completing the reproductive cycle. 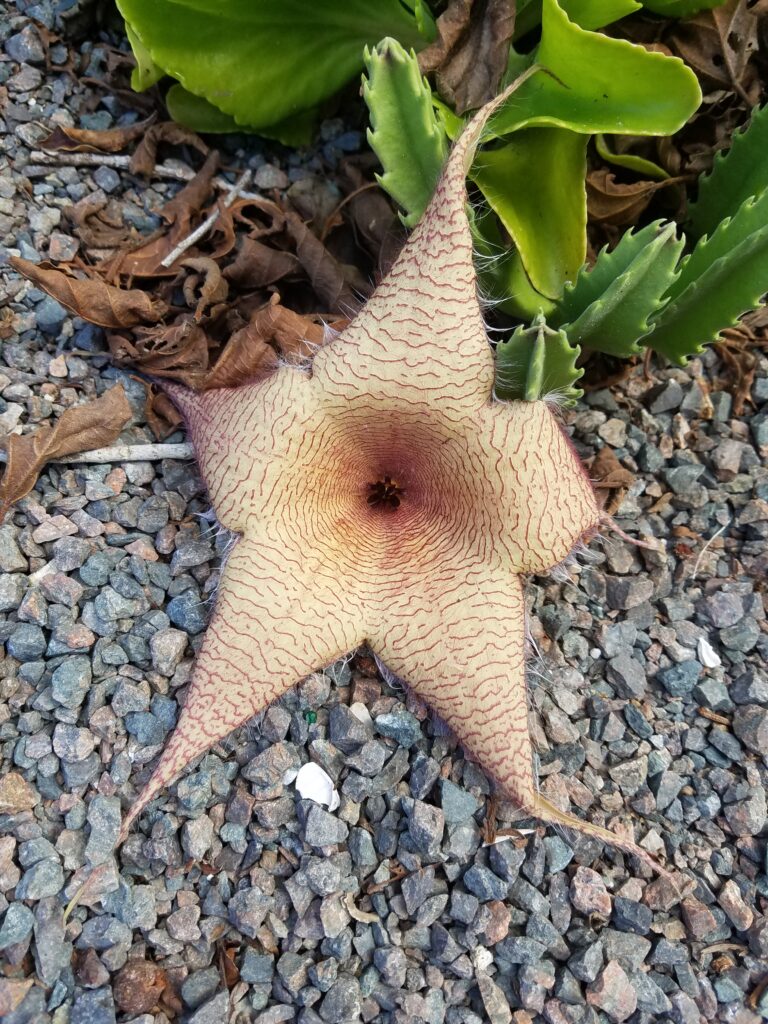 Flies also get in on the action. There are several fly species that are pollinators: fruit flies, hoverflies, midges, thrips, and mosquitoes (yes, mosquitoes, technically, are considered flies). The most potent pollination example might be the carrion flies, which pollinate plants from the genus Stapelia, known as the carrion plant. Carrion flowers smell of rotting flesh, which attracts flesh-eating flies. The flies swarm the center of the flower, both pollinating and laying their eggs on the plant. The eggs ultimately don’t produce a new generation because there is no meat for the freshly hatched larvae to feed on. That’s of no concern for the carrion plant, as it received reproductive services. Here at the Garden, we have a stinky Stapelia gigantea. You can find it blooming in the Foster Succulent Garden in the fall, and while it doesn’t bloom for very long, if you happen to be strolling by, you will smell it. Instead of recoiling at the smell, perhaps your newfound knowledge will entice you to appreciate the evolutionary trickery at play.

Moving up the food chain, two larger flying animals act as pollinators: bats and birds. Bats are prolific pollinators, especially for tropical plant species. Plants pollinated by bats typically have flowers that are white, large enough to accommodate the bat’s face, and emit a strong smell. The plant Strongylodon macrobotrys, commonly known as jade vine, has unusual turquoise blooms and is bat–pollinated. As a bat hangs upside down on the vine gathering nectar from the flower, the pressure of the bat’s weight stimulates the flower to eject pollen onto the bat’s head. As for birds, lots of species, including sunbirds, honeyeaters, orioles, and tanagers, rely on nectar as a steady food source, thus gathering and transmitting pollen as they move from meal to meal. 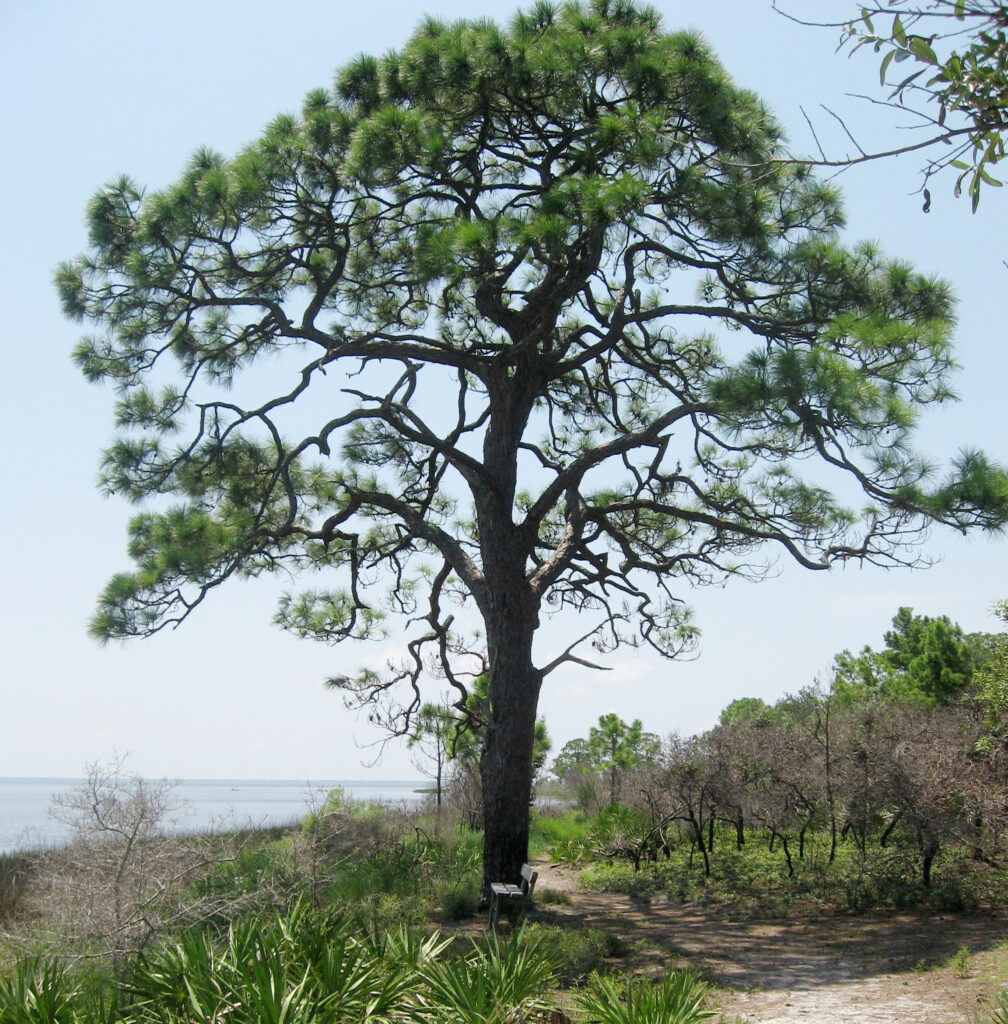 Do you know what’s stranger than flying pollinators? Wind pollination. Some plants, like this slash pine (Pinus elliottii), roll the dice and let chance decide their fate. Flowers that rely on wind pollination are typically small, have no petals, odor, or nectar. Instead of producing a sweet and sticky lure, they spend their energy producing a huge amount of pollen to disperse in gusts. To receive the drifting pollen, their stigma, another part of the female reproductive structure, sticks far out past the flower into the open, catching pollen laden breezes. Most conifers, plants that produce cones, and grasses rely on wind pollination.

Have any of our unusual suspects changed the way you think of pollinators? Typically, bees and butterflies get all the attention, and other pollinators are left by the wayside. These unusual pollinators play a critical role in the reproduction of our plants and in the food we eat. Without them, our ecosystems wouldn’t be complete. Consider that the next time you go to swat a fly, cringe at a bat, or say “ewww” to a beetle! 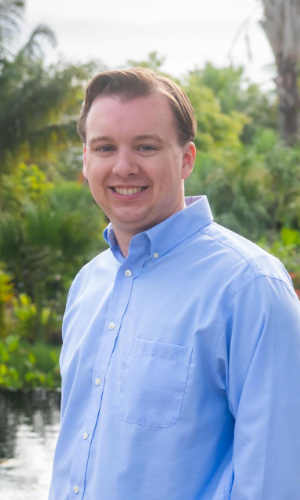 Kyle Possai is an Educator II at Naples Botanical Garden. When not at the Garden, he enjoys making music through guitar and piano.