Garden experts join a rescue mission to an uninhabited island to save cacti under siege.

Nestled behind the display gardens, a section of our nursery serves as a bank vault, safeguarding 400 tiny cacti. They represent nine species that are in danger of eradication in their native Puerto Rico following the arrival and spread of two invasive pests. Our seed bank secures some 95,000 of their seed. Often, acquiring rare or endangered plants is as straightforward as obtaining seeds or cuttings from a collaborating botanical garden. Not so in this case. Let us take you to Mona Island, off the coast of Puerto Rico, to discover the botanical adventure behind this conservation effort …

The journey was arduous before it had even begun: a trek across Alligator Alley to Miami International Airport, an early morning flight, an extended wait in San Juan, Puerto Rico, a car ride clear across the island, and a 5:30am departure by boat the next morning to Mona Island, a 22-square-mile natural reserve located 45 miles offshore.

“It’s a logistical nightmare to get to paradise,” the expedition’s leader, botanist Christian Torres-Santana, tells his companions as they cross the rough waters of the Mona Passage.

“But then, once you get there, you don’t want to leave.” Two hours after leaving the dock, Naples Botanical Garden Vice President of Horticulture Brian Galligan and Natural Resources Director Eric Foht glimpse Mona’s cliffs emerging over the horizon. 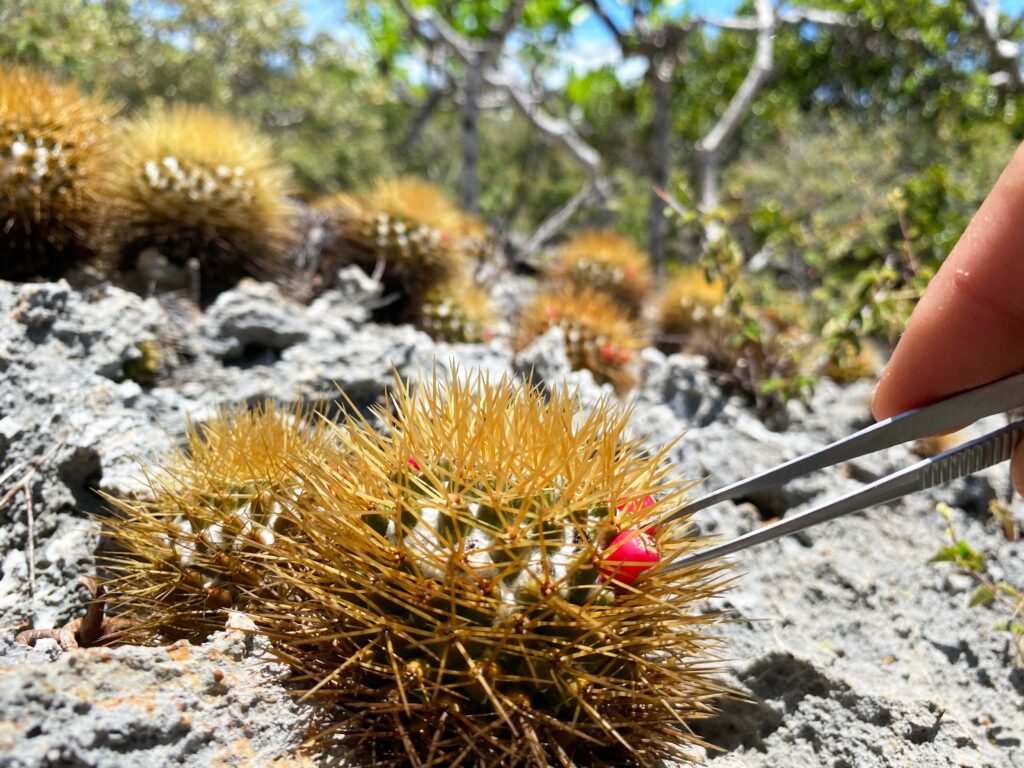 “This,” Galligan says to himself, “is gonna be insane.”

Foht and Galligan joined Torres Santana, Armando Feliciano, and Adierén Villanueva from Effective Environmental Restoration on a four-day expedition in June 2021 to collect native cacti at risk of succumbing to two invasive pests, the Harrisia cactus mealybug (Hypogeococcus pungens) and cactus moth (Cactoblastis cactorum), that showed up in Puerto Rico about 16 years and 58 years ago, respectively. They have infested the dry forests of the main island and Caja de Muertos, a smaller island to the south.

This trip focused on Mona Island, with a brief jaunt to Punta Ballenas in the Guánica State Forest, a UNESCO Biosphere Reserve where the pests are present and killing thousands of cacti.

The mealybug — the worst of the two threats — hasn’t appeared in Mona’s cacti, though Torres-Santana suspects it’s only a matter of time before they are imported unwittingly via a boot, a backpack, a tent, or a hurricane. 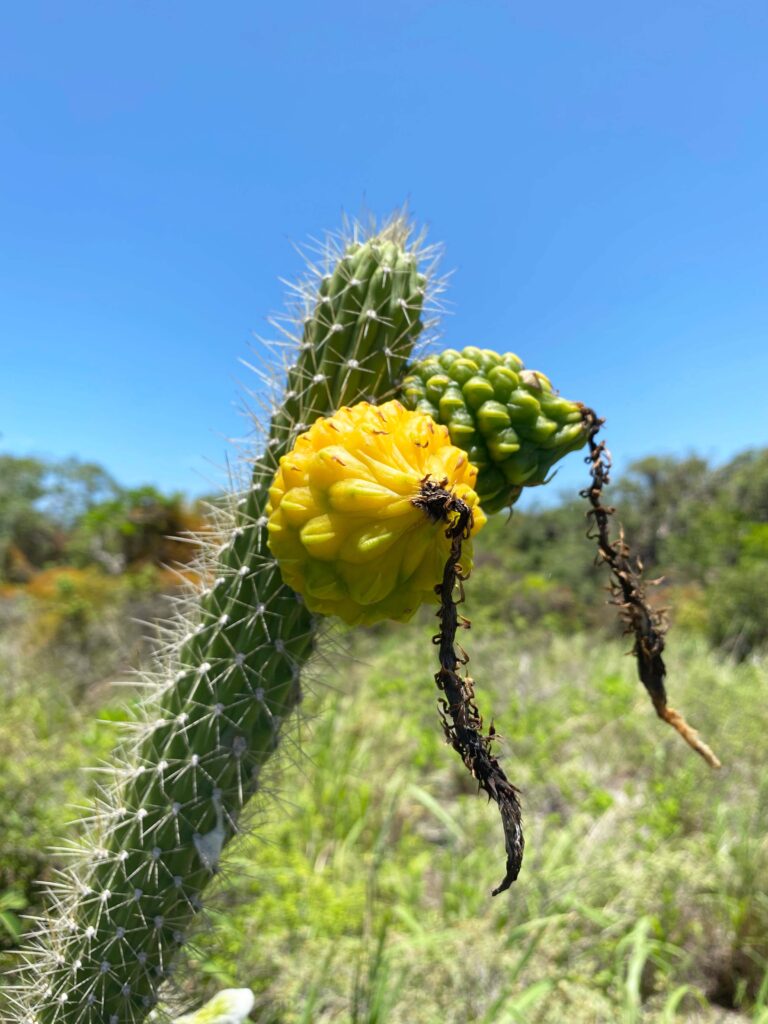 The mealybug, the project’s primary focus, distorts growth on the columnar cacti stems and kills the plants. The cactus moth, in its caterpillar stage, bores into prickly pear cactus pads, eating their flesh from the inside. Ironically, both were used as biological controls in Australia, where cacti in the Opuntia genus, prickly pear, and Harrisia genus are considered invasive.

But in Puerto Rico, these cacti and others that the insects attack are native species. Conservationists are particularly concerned about the Going to Extremes fate of federally threatened Harrisia portoricensis and endangered Leptocereus grantianus in the wild as the pests have already killed those in cultivation.

Entomologists in the U.S. mainland, Puerto Rico, and at the Foundation for the Study of Invasive Species biological control laboratory in Argentina are seeking ways to control the mealybug — critical research that could save Puerto Rico’s cacti and keep the insects from further spread in the Caribbean and North America.

But could they find an answer before the mealybugs infested more cacti populations? 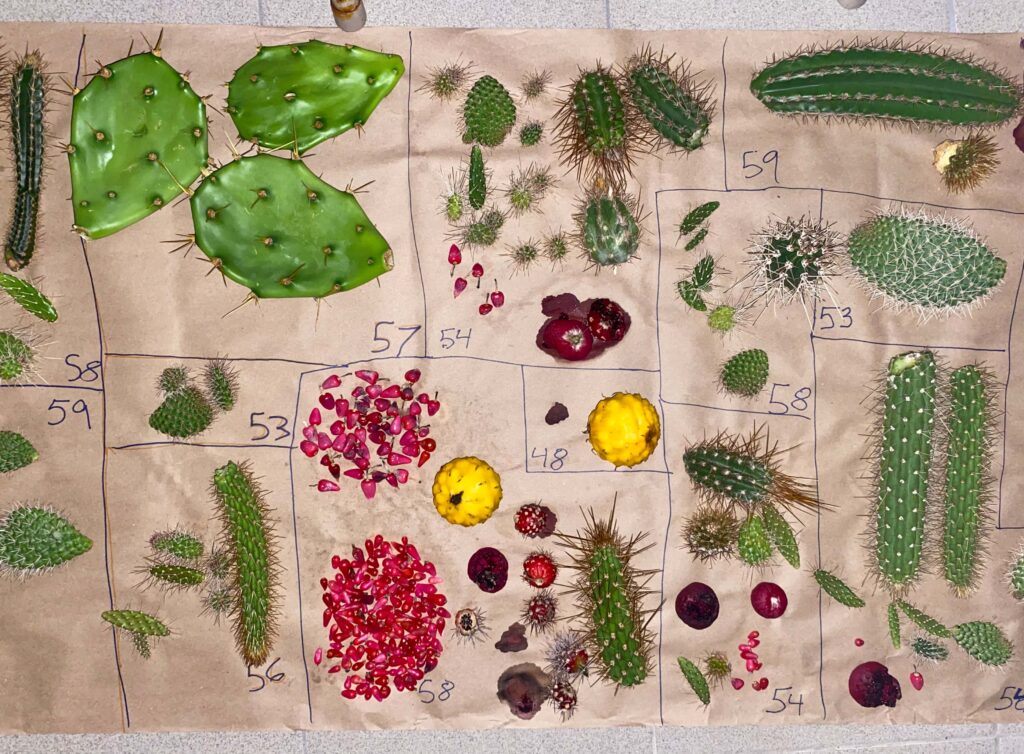 “Nobody was focused on safeguarding the cacti in case they continue to decline,” Torres-Santana says. “All of the studies are focused on mitigating the threat and studying its distribution and impacts.”

He wanted to conserve the species by collecting seeds for long-term storage and cuttings that could be propagated, grown to maturity, and shielded from the insects, thus ensuring the plants’ genetics are not lost even if they are eradicated in Puerto Rico. His plan was a departure from typical conservation projects that target one or two individual threatened species. Instead, the project will safeguard all members of a single family, Cactaceae, which are a backbone of many Caribbean dry forest ecosystems.

“We’re never going to get anything done one by one. We’ve got to start working by larger groups of species or by ecosystems, and this is an example of that,” Torres-Santana says.

They applied for federal funding through the U.S. Department of Agriculture Farm Bill about five years ago, but the money went to the biological control research essential to constrain this pest. With backing from Hilda Díaz-Soltero, the Caribbean Advisor to the Administrator for the USDA Animal and Plant Health Inspection Service (APHIS), they reapplied in 2019, successfully.

You can’t preserve plants in the same place where they are under siege. Díaz-Soltero had met Galligan and Vice President of Conservation Chad Washburn after Hurricane Maria struck the island in 2017, when the pair had come to help Torres-Santana and other colleagues in recovery efforts. She remembered the Naples Botanical Garden representatives, their offer to assist with future needs, and asked if they would house the cacti collection for this project.

“She’s like the rock star behind this project,” Torres-Santana says. “Without her, everyone would have given up.”

Torres-Santana, Díaz-Soltero, and Eduardo Ventosa, the Project Principal Investigator with EER, choose collecting spots in consultation with forest managers, seeking places where the invasive insects have not infiltrated. Mona, Desecheo, Vieques, and Culebra islands in the Puerto Rican archipelago are among the untainted regions to date.

You need a Puerto Rico Department of Natural and Environmental Resources permit to venture onto Mona for research purposes (and 10 state and federal permissions to collect plants). Since the COVID-19 pandemic started, the island has been closed to the public; only scientists and technical staff are allowed to visit.

Aside from natural resources rangers protecting the island, the collecting team would be alone, the solitude adding to the mystique. Torres-Santana likens Mona to the Galápagos — a place where botanists, environmental scientists, biologists, and horticulturalists can observe ecosystems only minimally impacted by humans.

“It’s just a magical place,” Foht says. “It was a window into how things would occur on their own and on their own timescale.”

The landscape offers Galligan, who directs the design and maintenance of our display gardens, a chance to study soil types, growing conditions, and the configurations of plants in nature. The knowledge will help him manage plants and create authentic experiences.

“We try to make realistic settings, such as what would you see on an island in the Caribbean,” he says.

But the cacti, naturally, consumed most of their attention.

The dry forests of Mona are almost extraterrestrial in appearance. The wind sweeps across vast plains. The earth is rocky and arid. Cacti are everywhere — both the smallest and largest plants in sight. Galligan says at times it felt like they themselves were the overstory, the tallest figures in the landscape.

In spite of the abundance, conservationists cannot simply take multiple samples from a single location and consider their work done. They take one cutting or fruit per plant and seek specimens from numerous areas to ensure they have a sample of the genetic diversity. For four days, the team combs the island, venturing out after breakfast, sometimes so consumed that they forget to break for lunch.

The team climbs into a utility vehicle lent by the Department of Natural and Environmental Resources. They cross the 7-mile island and follow Torres-Santana on foot through the cacti forest. The team dodges cacti spines and poisonous plants. They pick their way over uneven terrain; the limestone bears “dogtooth rocks,” as sharp and jagged as their name implies.

In the distance, they spy a strangler fig (Ficus citrifolia) and make their way toward it. Mona Island is a limestone plateau with little soil suitable for deep-rooted trees; the fig’s presence indicates a cavern or sinkhole where organic matter amassed, allowing roots to sprout. Some sinkholes lead to caves, and some caves open onto cliffs where one of their targeted species, Opuntia stricta, is known to grow. It is missing from their collection.

They step into cool darkness.

Galligan is torn between exploring and his better judgment.

“Within eyeshot, you could see dozens of sinkholes,” he says. “You really had to watch your footing.”

They find firm ground and take in their surroundings. Mona is among the world’s most cavernous regions per square mile, according to American Archaeology, a geological wonder as well as an anthropological one. Stalagmites and stalactites jut from ground and ceiling. Etchings abound, telltale signs of Native inhabitants and European explorers from centuries past. The island was once used for mining guano — bat excrement — valued as a fertilizer in the late 1800s and early 1900s. Foht finds himself contemplating the history of the place.

The cave opens, like a window to the sea, several hundred feet below. Galligan looks out. Birds swoop by — at eye level.

“I remember the frigatebirds looking at us like, ‘Huh?’”

They step onto the cliff, survey their surroundings, and spy the large elliptical pads of Opuntia stricta. One plant is within reach.

Torres-Santana lays on his stomach. Barbecue tongs and clippers in hand, he reaches over the edge. Foht hits “record” on his cellphone.

“It’s no wonder they call it ‘tuna del mar,’ ‘sea tuna,’” Torres-Santana narrates. “It grows right next to the ocean. This species is susceptible to Cactoblastis cactorum. It is present in Mona, and we want to safeguard them, and we’re going to collect samples of it and send it to Naples Botanical Garden for ex-situ banking.”

He wiggles closer, extends the tongs, and grasps a pad.

“There,” he says, lifting the sample in triumph, “collection done.”

Adventure aside, the days are hot, long, and grueling. The team struggles to stay hydrated under the blazing sun. Nighttime tasks are arduous, too.

Back at camp, they have to clean each specimen to ensure no pests hitch a ride to the United States. Horticultural history is rife with devastation caused by insects exported from their native ranges into other countries. The downfall of the American chestnut tree, the die-offs of laurels, and the sweeping losses in Florida’s citrus industry are tied to pests caught up in global trade.

To prevent such an occurrence, the team spends hours each night cleaning cacti.

“Some of these cacti have hair on their spines,” Torres-Santana explains.

“We have to use a brush to clean them hair by hair.” Each specimen is washed multiple times, too, in soap and water, a diluted bleach solution, isopropyl alcohol, and neem oil before the USDA-APHIS entomologists go through the plants, spine by spine and hair by hair under microscopes. A single insect could contaminate the batch. Once cleared, the team labels everything by species and location found, wraps each specimen, and ships them to the Garden. The team sleeps a single hour the night before departure readying and packing the specimens — 504 plants, cuttings, and fruits from 19 sites.

When the plants arrive in Naples, conservationists sort and pot the cacti cuttings and prepare the seeds for long-term storage. Eventually, once conservationists grow duplicates to the collection, some will be put on display in the Garden and shared with other botanical gardens.

“We partnered on this project because it really takes the special expertise of many people and organizations to conserve plants,” says Washburn. “Conservation projects are most successful when there are multiple partners working on shared goals. This is a great opportunity to ensure the cacti of Puerto Rico survive into the future.”

The Garden’s capacity to take on conservation projects like this one is about to amplify with the Evenstad Horticulture Campus. The $15.5 million project adds more than 66,000 square feet of greenhouses, nurseries, and laboratory space, as well as state-of-the-art equipment for horticulture and conservation work. Construction began in March 2022 and is expected to last about a year.

This article originally appeared in the Winter 2022 issue of Cultivate, the Garden magazine.