These dogged observers, representing various organizations, were part of an authorized gopher tortoise agent permitting class that the Garden agreed to host in exchange for data about the threatened reptiles’ status on our land.

The survey, completed as part of the course, yielded important information about burrow locations, prevalence, and how gopher tortoises are faring on our property.

Course participants identified 132 potentially occupied burrows, in which 66 tortoises might be living, according to Neal Halstead, the trainer and a senior ecologist at the nonprofit Wildlands Conservation. That population size is a rough estimate — a ratio of two burrows for every tortoise (50%) is often used to approximate tortoise populations, though occupancy rates can vary from less than 20% to greater than 80%. Getting more precise figures requires cameras be snaked into burrows. Tortoises spend about 90% of their time underground, and they typically use more than one burrow. 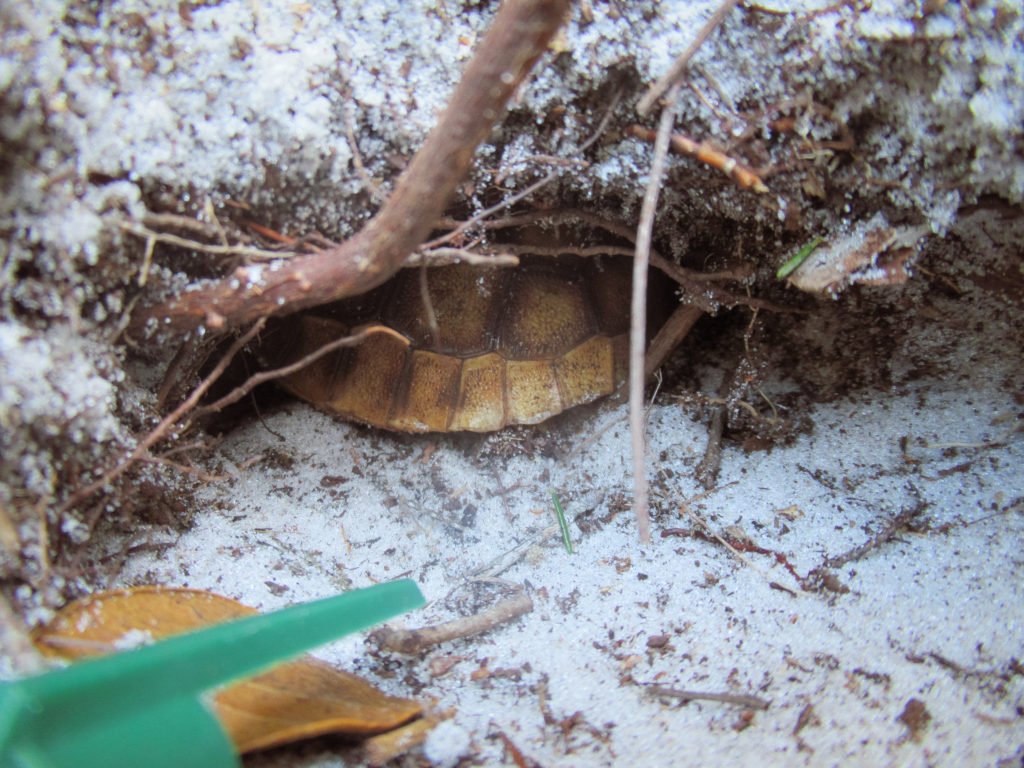 Temperatures had plunged during the survey, which prompted tortoises — like thin-skinned Floridians — to seek refuge from the cold. There weren’t any adult tortoise sightings, but sharp-eyed participants did spot a couple of hatchlings like the one pictured above. That’s a pen cap in the foreground to give you an idea of their size.

An examination of the burrows suggests we are hosting tortoises of various ages, from hatchlings to juveniles to adults. That’s significant, Neal says.

“There was quite a variety of burrow sizes. That shows reproductive efforts by adult tortoises are successful, and some hatchlings and juveniles are making it to adulthood,” he says. “Certainly, the habitat is supporting a fairly dense population of tortoises, and there’s good evidence the population is healthy.”

The number of tortoises somewhat surprised Eric Foht, the Garden’s Natural Areas manager. The reptiles don’t show themselves often, and Eric suspects they tend to favor the property’s interior, away from pathways. The survey offers insight into how much land tortoises need for their range.

“It appears even a small space can be beneficial,” Eric says. About 18 acres were surveyed.

Scientists are researching how many can populate a given area. Florida law requires developers and property owners to hire FWC-permitted authorized agents to survey for burrows and relocate tortoises to state-permitted recipient sites if human activity is a threat. (Click here for more information on permitting from FWC.)

Gopher tortoises are considered “threatened” under Florida law, “regionally threatened” by the federal government, and listed as “vulnerable” by the International Union for Conservation of Nature, the world’s authority on the status of plants and wildlife. The loss of tortoises reverberates throughout the ecosystem. They’re considered “keystone species” because more than 350 other species share their burrows.

The tortoises are believed to date back 60 million years, making them one of the oldest living species. Individuals can live at least 40 to 60 years in the wild and more than 90 in captivity. They were once nicknamed “Hoover chickens” because they served as an emergency food source during the Great Depression. But development and related stressors threaten their longevity and abundance.

Our staff will use the class findings to guide future land management decisions in our natural areas, such as burning small patches of land under prescribed conditions. Fire reduces canopy cover, important for sun-loving tortoises, and triggers the growth of plants that comprise their diets.

The mapping project was a good reminder, too, of the role we play in protecting wildlife.

“Our management activities are working to conserve a diversity of plants,” says Vice President of Conservation Chad Washburn. “But that’s not all. We’re also providing high quality habitat for wildlife.”