Conservation update: We have a seed bank!

In the world of botanical gardens, a moment last week counted as a really BIG DEAL.

Conservation Associate Jessica DeYoung placed her first specimen, Lechea cernua (nodding pinweed) in our new seed bank. The milestone moment was a quiet one with Jessica slipping the packet into the special freezer and then resuming her daily tasks. Today, we’re heralding the event with the fanfare it deserves. The seed bank’s introduction, you see, represents a major conservation undertaking for Naples Botanical Garden and, potentially, a boost to the health, diversity and long-term survival of Southwest Florida ecosystems.

Under the guidance of Vice President of Conservation Chad Washburn, Jessica has embarked on a mission to collect, study, and conserve native plants found in our natural areas—90 acres of land that we set aside for conservation. The seed bank is our newest—and, arguably, most important—tool in this effort.

“Some of these species only occur here, and if they’re lost, they’re gone,” Jessica explains. In fact, 70 of the 120 native species identified in our natural areas exist in three or fewer botanical garden collections in the world (many in no collections). She concentrates on “scrub” habitats, high, dry lands that are a favorite of developers. The World Wildlife Organization estimates that only 10 to 15 percent of scrub habitat remains in the state. That’s concerning because some 40 to 60 percent of the species living in scrub exist only in that habitat.

“I would say there’s no actual mapping of the population trends of most of these plants,” says Jessica, who carefully records data about the native species to better understand their growth, reproduction, and prevalence.

Her work starts with this kind of monitoring, followed by the collection of seeds when they are at their most abundant. She partially dehydrates the seeds for freezing (if they are too moist, the frozen water will expand and ruin the seed).

The seed collections ensure genetic material is preserved in case of their decline or extinction in the wild, make plants available for restoration projects, and allow us to save far more plants than we could if we had to grow them in the nursery. 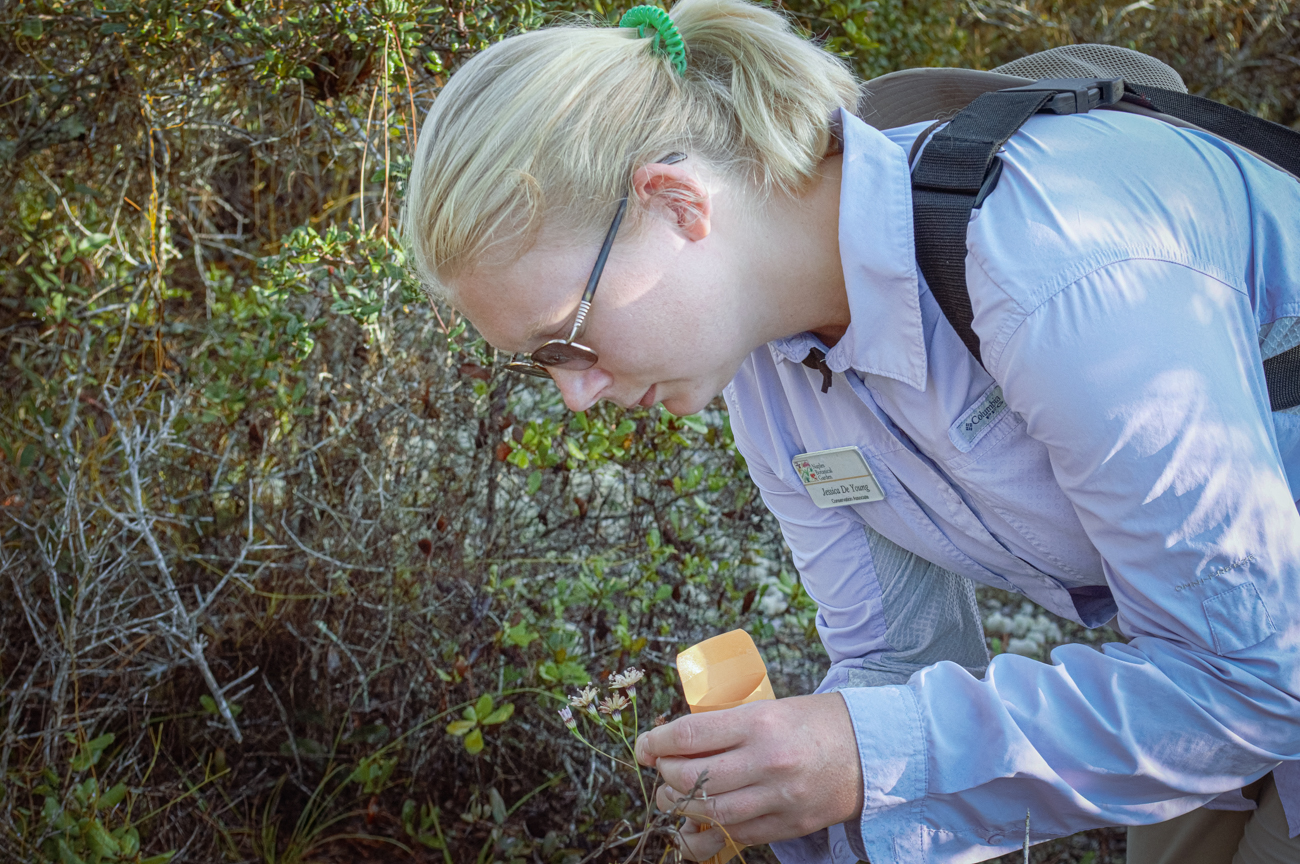 “The seed bank gives us the capacity to go beyond conserving a few living plants and allowing us to capture broad genetic diversity,” says Chad. A single seed packet, potentially, can contain a thousand seeds representing a thousand different variations of that species. In restoration work, the diversity is essential for cultivating a healthy ecosystem.

Jessica will store the seeds for three- and six-month increments and then remove some of them, revive them, and see how well they grow after having been frozen. There is little data on how Southwest Florida native seeds fare following their time in storage.

“There is a whole learning curve on taking these species from seed to a living plant,” Chad says.

Jessica’s conservation research goes beyond seed banking.  She’s experimenting whether manipulating seeds in various ways aids in their growth. For example, she might soak seeds, a process that replicates our wet-and-dry cycles, or ferment them, which is akin to seeds passing through an animal’s digestive track, or scarify them, making tiny nicks in their outer layers as might occur naturally when the wind blows them through a rough medium like sand.

While she can rely on existing scientific literature for designing some experiments, some species have not been studied at all. In those cases, Jessica is coming up with growing protocols on her own—and breaking new scientific ground in the process. Her protocols will be entered into the Native Plant Network’s Propagation Protocol Database, which focuses on North American plants and is available to any scientist working on conservation and restoration.

That research ties into another of the Garden’s emerging conservation endeavors—advising communities on how to grow an “urban forest” that is sustainable, resilient to threats such as storms and diseases, suitable for a warming climate, and demands few human interventions such as irrigation and fertilization.

“We want to advise people what they should put into an urban forest; we also want to advise them on how to grow it,” Jessica explains. The growing protocols she’s developing will allow the Garden to do just that.

You often can find Jessica trekking our natural areas in the early mornings. If you spot her out there, seed packets and notebook in hand, you know now that she’s working on some pretty critical research that will deepen our understanding of Southwest Florida ecosystems and how we can protect them.