Get Growing! A Vegetable You Can Grow This Spring

Hot sauce. Salsa. Paprika. What is the common ingredient? Pepper! No, not the black pepper found on your dining room table. What we’re talking about are the fruits from several plant species found in the genus Capsicum. Like their nightshade family cousins, tomatoes, these fruits are used and colloquially known as vegetables. And as the zesty one in the clan, pepper plants have traveled around the world spicing up dishes everywhere they go.

It all began in central east Mexico about 9,000 years ago. That is when humans first started using wild pepper, C. annuum var. aviculare.

Just a few thousand years later, pepper had been selectively bred from its wild form to a version more useful to people, a process known as domestication. Whether you grow habaneros, jalapeños, or bells, these fruits are known generally as peppers, a common name Columbus gave to these plants. After tasting a pepper, he noted the fruit’s pungency was similar to a familiar spice, black pepper.

Though black pepper is from a completely different plant family, this similarity and the color of the fruit inspired him to name the plant red pepper.

Peppers of all colors and tastes — both sweet and spicy — are all found in the genus Capsicum. There are approximately 25 pepper species, and five of them, C. annuum, C. baccatum, C. chinense, C. frutescens, and C. pubescens, are domesticated. The thousands of varieties we have today can all trace their lineage back to these five species.

How we use peppers can be just as variable as the cultivars we breed. They are either used as a vegetable or go unseen in dishes when used as a spice. Hot peppers, also known as chile peppers, become a spice when they are dried and ground. When used fresh, they can be added to dishes whole, made into hot sauces, or chopped up and mixed into salsas. Chile peppers, whether fresh, dried, roasted, or pickled, are often used to add heat to a meal. In Asia, even the leaves of the plant are used, such as with kimchi in Korean cuisine or as cooked greens in the Philippines.

Hot peppers, packing a fiery punch, get their heat from capsaicin, a chemical for which their genus is named. It produces a burning sensation in mammals. Interestingly, birds are not affected by capsaicin and spread the plant’s seeds after eating the peppers. Capsaicin, like peppers, also has a variety of uses. First discovered in the 19th century, today it is used to make pepper sprays. Recent studies show the chemical can also increase the efficiency of solar cells that convert sunlight to electricity.

Not all peppers contain capsaicin, however. Sweet peppers, also known as bell peppers, lack the chemical. They’re often used in salads, as a pizza topping, or, when cut in half and stuffed with filling, as a dish on their own. Sweet peppers can also be dried and ground to make the spice paprika.

Hot or sweet, peppers are used around the world. If you want to use hot peppers at home, try your hand at making one of our Garden recipes for hot honey.

Chef Jack Raben of Fogg Café says, “Hot honey is my No. 1 pizza condiment but is also delicious on chicken wings, fried chicken, roasted vegetables, sautéed mushrooms, or cheese.  The sweetness harmonizes with the spiciness and adds a great flavor profile and depth when added to a dish.”

Here is his recipe:

*Please note the recipe may need to be altered slightly depending on the spice level chile pepper you use and your preference.*

Using a sauce pot, simmer chiles and honey for 10 – 15 minutes on medium heat. Do not reduce. After simmering, strain while hot, keeping the honey and discarding chiles.

Test your creative side!

Here is a fun coloring page for children (and adults). 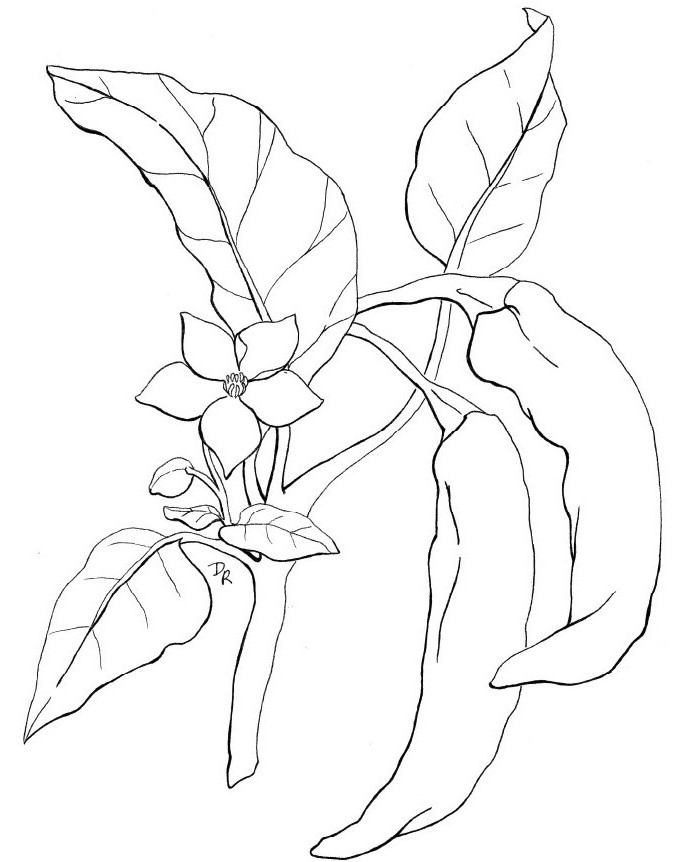