Connecting with Nature — and Ourselves

This blog supports this year’s Intertwined theme, which explores the connections in the natural world and the bond between people and plants.

In November, North Carolina-based artist Patrick Dougherty will arrive at the Garden and, along with his son, Sam, and community volunteers, create a one-of-a-kind interactive sculpture from willow saplings.

He does this by weaving and interlocking branches until a structure emerges — unique, whimsical, and a perfect complement to the landscape in which he’s working (in our case, the Kapnick Caribbean Garden lawn).

The installation promises to be a talking point unto itself, but we want to expand the conversation. Dougherty’s work inspires us to consider the concept of “Intertwined,” or the interconnections that exist among plants, amid plants and their ecosystems, and, critically between the natural world and the human-built one. Throughout the year, watch for blog posts in Notes from the Garden, daily programming, additional exhibitions, and other special programs exploring this theme.

I’ve teamed up with Natural Resources Director Eric Foht to look for examples of nature’s interdependence and humankind’s connections to our environment. They are endless, but we narrowed them to three and set off through the Vicky C. and David Byron Smith Uplands Preserve to check them out.

For a shrub with an inglorious common name, hog plum (Ximenia americana) is a pretty thing with delicate leaves that range in hue from emerald to chartreuse, depending on the soil’s moisture level. The first one we spot, a few paces from the lakeside trail, has small green fruits on it. They’ll swell to the size of cherries and ripen to yellow. They’re edible to people, birds, and animals; gopher tortoises munch on those that fall to the ground. There’s value in the seed’s oil, too, which is extracted and used in skin- and hair-care products. Perhaps that is why another of this plant’s common names is “tallow wood,” tallow, of course, referring to a kind of fat.

But the real reason we’re featuring hog plum is its underground secret.

Hog plums grow haustoria, or parasitic roots, which meander through the soil, latch on to neighboring roots, and siphon nutrients — not enough to kill the host plant, but enough to give themselves a boost. They’re known to like oaks, to which Eric and I can attest after seeing several hog plum and oaks side by side. A couple of our co-workers once grew the two species in the same container — you can see the intertwining of their roots in the photo below.

Hog plums aren’t limited to mooching off of oak trees — there’s evidence of them connecting with other species and also evidence of them thriving without latching onto a neighbor at all. There are some 4,000 types of parasitic flowering plants in the world. Hog plum are considered “semi-parasitic” because they can make their own food; others, such as the corpse flower (Rafflesia arnoldii), depend entirely on the nutrients of other plants to survive.

Cabbage palms (Sabal palmetto), our state tree, are also known as sabal palms, but we’re using their veggie-derived moniker to make a point: This tree was an important source of food, shelter, and building materials for native peoples and settlers alike.

Tribes and settlers harvested the palm’s bud, which contains a tender core reminiscent of cabbage when cooked, thus earning the nickname “swamp cabbage.” In LaBelle, there’s an annual Swamp Cabbage Festival, celebrating old-time food and cultural traditions (armadillo races, anyone?). In grocery stores, the product is known as “hearts of palm,” and available canned or jarred. Harvesting this portion of the tree, however, results in the palm’s death, so do not attempt to do this on cabbage palms you encounter on public lands, no matter how abundant they seem.

The palm offers far more than sustenance. In fact, the Seminole and Miccosukee tribes referred to it as “the tree of life,” because it provided food, timber, fibers, and fronds for humans, as well as food and habitat for wildlife. The roofs of chickee huts are made from woven cabbage palm fronds, which are so watertight they need replacing only every five years or so.

Cabbage palms support many plants and animals as well. Eric and I stop to study one up close. In the “boots” or remnants of old palm fronds, other plant species have taken residence.

“This one is kind of fun,” Eric says, pointing to a fern, a golden polypody (Phlebodium aureum) tucked into a boot. He directs me to touch its roots. They are soft and silky, like a rabbit’s paw. No wonder the species is also known as “hare’s foot fern.”

Cabbage palms are among the most ubiquitous and hardy species in our landscape, but they support one of our imperiled plants, the hand fern (Ophioglossum palmatum), so named because it looks like a hand with fingers. It is state-endangered and nearly always lives in the organic material accumulated in cabbage palm boots. Fakahatchee Strand Preserve State Park has one of the last remaining populations of these once-abundant ferns.

What a perfect example of nature’s connections, of one species harboring another.

In Florida, mangroves come in three types: red (Rhizophora mangle), black (Avicennia germinans), and white (Laguncularia racemosa). The most common are the reds, and on the Garden’s property, they loom along the southern edge of Deep Lake. Mangroves, I think, are one of our region’s most enthralling ecosystems and the one that best exemplifies nature’s interrelationships.

Mangroves have been dubbed “walking trees,” because they seem to stand on their prop roots. How appropriate. Mangroves act as sentries, protecting the shoreline from storm surge and sea-level rise. Even at our inland Garden, they buffered the property when 2017’s Hurricane Irma roared through, Eric says.

“This brackish marsh back here could have completely flooded,” he says.

Eric spots a fish amid the roots. If we were closer to the sea, we’d see even more critters. Mangroves support an entire web of life: microorganisms, algae, invertebrates, fish, reptiles, amphibians, birds, mammals. In fact, an estimated 75% of South Florida’s game fish and 90% of its commercial species are dependent on the mangrove ecosystem during at least a portion of their life cycles, according to the University of Florida’s Florida Museum. Wading birds, such as white ibis, feed on crustaceans, including the mangrove tree crab. Bald eagles and other birds of prey swoop in for fish; dolphins do the same underwater; mammals, including the endangered Florida panthers, depend on mangroves and coastal hammocks as part of their ever-shrinking habitat.

Mangroves support their fellow plants, as well. In fact, intercoastal areas like the Ten Thousand Islands might never have evolved beyond oyster bars if mangroves hadn’t taken root, spread, produced organic material, trapped sand, and given seeds of other species a place to take root.

“If the mangroves hadn’t built the islands, then those plants couldn’t have grown in the interior of the islands,” Eric explains.

Other interrelationships are invisible to the eye. Microbes and fungi in the mangroves’ roots use decaying leaves as fuel and recycle nutrients such as nitrogen and phosphorus. Mangroves trap carbon from fossil fuels that settles in the water. A mere acre absorbs 1,450 pounds of carbon — the amount emitted by a car driving 7,560 miles, according to the Smithsonian Institution.

There are even celestial ties, Eric says. Mangroves are “viviparous,” meaning that their seeds germinate on parent plants until they drop into the water as seedlings.

“I look at their propagules like ships heading out to sea,” Eric says. “They’re using the tides, and what’s driving that is the moon. These plants are using the power of the moon to send their seeds around.”

There you have it. From sky to sea: Everything is intertwined. 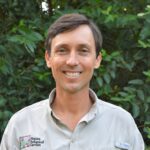 Eric Foht is the Garden’s Director of Natural Resources.