Slow down, and enjoy Kathryn’s Garden

It’s tempting, I suppose, to march straight down our boardwalk, buy your ticket, and officially start your visit. I appreciate your enthusiasm but beg you, slow down! In your haste, you risk missing what has become one of my favorite spaces: Kathryn’s Garden.

I loved this garden right away for its towering canopy and for its transformative power, the sense of crossing a threshold into another world. When I learned the story behind it, I loved it even more. If you can muster a few minutes of stillness, I’ll share it with you.

Kathryn’s Garden is modeled after the work of artist Henri Rousseau (1844 – 1910), a Parisian tax collector who, in middle age, decided to take up painting. He may have gotten a bit of tutoring, but by and large, Rousseau taught himself, scholars say. His portfolio grew to include portraits, streetscapes, scenes of war (he served briefly as a soldier), and community celebrations. But he is best known for his exotic, jungle-like landscapes, and that’s what our gardeners sought to replicate in designing Kathryn’s Garden.

(This year’s Hats in the Garden benefit, incidentally, is themed Rousseau’s Parisian Garden in honor of the painter and the creative power of public gardens.)

Following the artist’s lead gave our staff plenty of flexibility. Rousseau, you see, never left Paris. The foliage in his paintings is a compilation of the strange and wonderful plants he discovered in Paris’ botanical gardens, the Jardin des Plantes, in particular.

“One of the aspects of Rousseau’s paintings is that there are things lumped together that shouldn’t be together,” says Liz Chehayl, the Brian Holley Curator of Collections. “In here, we can have the feeling of his paintings — that jungle or rainforest feeling — but we can combine things from different countries and different areas of the world.” She lists examples: African oil palm, Asian mango, Chinese lychee, South American philodendron. In contrast, the plants in our other display gardens adhere to the regions they celebrate, such as Brazil or the Caribbean.

“We tried to make it as exotic as possible,” Liz says. It appears to have worked. Sometimes, she’s heard kids on field trips humming the Jurassic Park theme; on the day we’re out there, a teacher practically has to pry her students away from the section overlooking a pool and the seemingly impenetrable trees, vines, and bushes surrounding it. 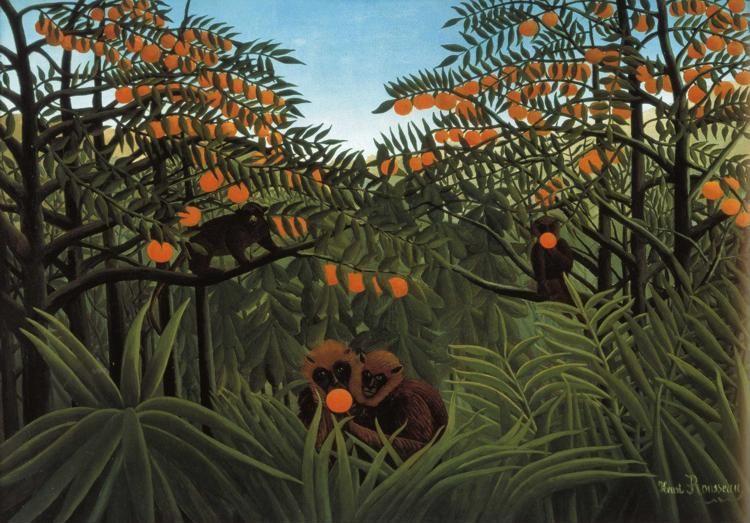 Rousseau’s jungle scenes are punctuated by pops of color — bright orange fruits in Monkeys in the Jungle (1910) or the yellow and blue lotus-like flowers in The Dream (1910), but green dominates. The palette for Kathryn’s Garden is the same: lots of green, and an occasional dash of color. That means to appreciate the garden, you’ve got to look deeply at the foliage and discover details such as the layering of trees and understory bushes, or the shapes, sizes, and textures of leaves and fronds. I like those of the Australian fan palm (Licuala ramsayi) for their enormity and of the rattlesnake plant (Calathea lancifolia), which look like an artist painted a pattern upon them. 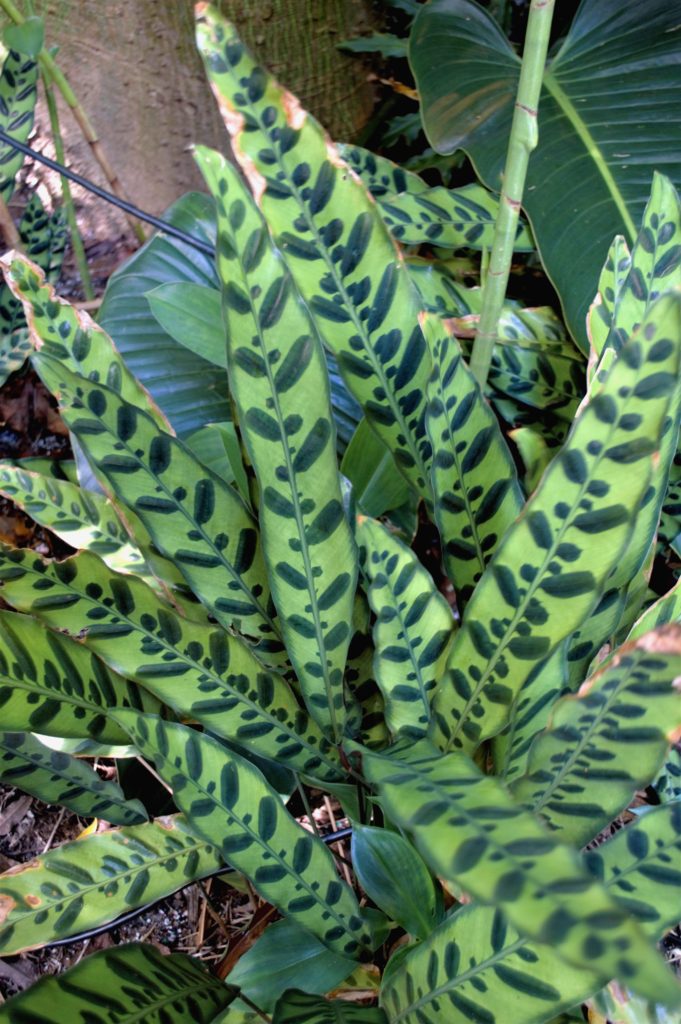 Look even more carefully and notice the epiphytic plants — those that grow on the surface of trees and don’t require soil for nutrients. They wrap and sprout and drip from the trees, adding another layer of complexity.

Nick Ewy, the Director of Collections and an expert on orchids and epiphytes, joins me one morning and points out some of the more remarkable species. Just beyond the front gate, he gestures to what might be one of the most unusual — a cactus that grows in the rainforest. It’s called the moonflower, or Strophocactus wittii. Unlike most epiphytes, which spread seeds via the wind or animal scat, the moonflower drops its seeds into floodwaters. When the waters recede, the seeds stick to new host trees elsewhere in the forest. A few steps away, the sun catches another epiphyte, the blue oil fern (Microsorom thailandicum).

A couple of tiny orchids are in bloom, specks of white and red against the green. Around the corner, Nick points out Monstera dubia, a vine whose leaves lay flat against the trees, as if plastered there. Eventually, Nick explains, the leaves will separate from the bark, but in their earlier stages they take the form of a green ribbon wrapped tightly around the trunks.

Rousseau never got his due during his lifetime, dismissed for the “childlike” simplicity of his work. Today, though, his style and influence are widely recognized. We’re glad we can celebrate the painter, whose imagination, after all, was sparked by his visits to botanical gardens. What inspiration will strike you during a visit to ours?