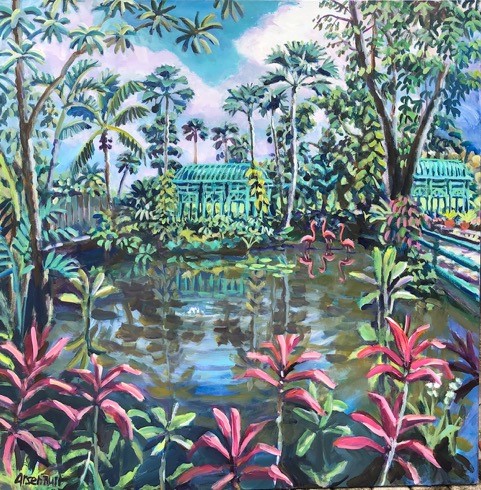 Though based in Naples, Arsenault’s sense of adventure and prolific artistic career have given him the opportunity to travel to and paint in some of the world’s most remote and exotic locations.

His passion for documenting iconic structures, historic plant specimens, and disappearing cultures has led him from the French Riviera to the Marquesas, Havana to Vietnam, and so many places in between. His wanderlust and paintbrush have literally taken him around the globe.

As he has done for Naples Botanical Garden, Arsenault has generously given of his time and talent in support of other community treasures, including several other botanical gardens.

Arsenault became involved with McKee Botanical Garden in Vero Beach, Florida, in 1993 during an effort to save the historic property from development. Formerly McKee Jungle Gardens, the 80-acre roadside attraction was one of Florida’s earliest and most popular, but it was threatened with development in the 1970s. Passionate community members rallied together with The Indian River Land Trust to purchase the remaining 18 acres through a fundraising campaign, to which Arsenault generously lent his talent.

Closer to home, the Everglades Wonder Gardens in Bonita Springs is another of Florida’s early roadside attractions which lives on today as a botanical garden. Established in 1936 as Bonita Springs Reptile Gardens, the 3.5-acre property is situated on the north bank of the Imperial River. It was built there to take advantage of travelers along Tamiami Trail, which had opened eight years earlier, transforming travel in Florida. This is the kind of history that draws Arsenault to capture a place, to preserve its story to share with others.