Get Growing! A Vegetable You Can Grow This Summer

Okra may be known for its seed pod, but seeds don’t form without a flower, and okra produces a lovely one. Just like hibiscus and cotton, okra is a member of the mallow family, and their flowers have a similar look. Only after the blossoms are pollinated will the seed pod begin to form. Before they are fully mature, seed pods are harvested and ready to be cooked. Okra has crossed continents and oceans and made its way into numerous cultures and cuisines. If you are a gardener, now is a great time to start your okra seeds. If you’ve never grown it before, you may want to do so after discovering more about its origins and use.

A relative of cotton, okra is well known in the southern United States and a favorite ingredient in regional dishes. Some consider it “slimy,” but that trait also allows it to work a certain magic in soups like gumbo, a popular stew from Louisiana that includes celery, bell peppers, onions, broth, meat or fish, and a thickener — okra! Yes, okra’s mucilage, the thick, gooey substance found in the seed pod, makes a great thickener. 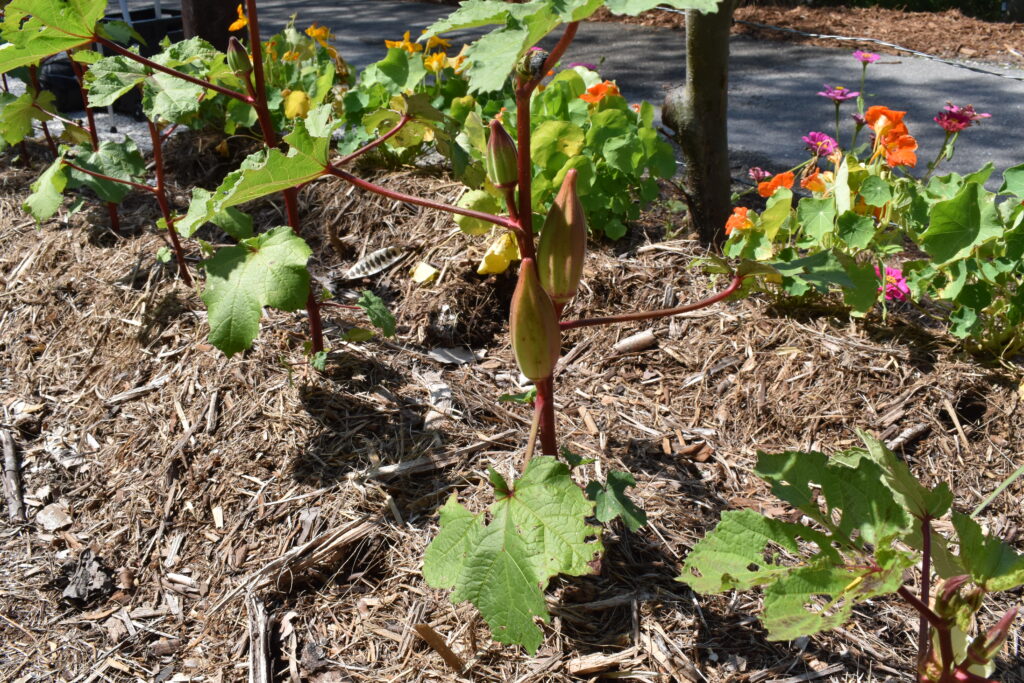 Okra isn’t limited to playing a supporting role in soups. It can be fried, sautéed, grilled, and, if you want to lessen the sliminess, roasted. If you want to use okra at home, try your hand at making pickled okra with this recipe recommended by Chef Jack Raben of Fogg Café. According to Chef Jack, this recipe, as posted on the website “Simply Recipes,” is his “favorite way to keep, eat, and preserve okra” and also “is the best Bloody Mary garnish ever made.”

*Please note if you plan to store okra for extended periods, make sure you sterilize jars and lids. Place a steamer rack. If you don’t have a steamer rack, you can lay a clean dish towel on the bottom of the pot to keep the glass jars from coming into contact with the pot’s bottom. Place the jars in the pot, and fill with water to the level of the jar rims. Heat water to a boil, leaving the jars to boil for 10 minutes. Remove jars, and place on towel. Place the lids in a large bowl before pouring boiling water on them.

Combine the following in a bowl:

1. In a medium saucepan, add the water, apple cider vinegar, kosher salt, and bring to a boil until the salt dissolves. Lower the heat, and keep the mixture warm.

2. Put one lemon slice, one tablespoon of pickling spice mix, and one garlic clove in the bottom of each jar.

3. Fill jars with okra, alternating which end is up. They should be around a half-inch to an inch below the lip of the jar.

4. Fill the jars with the cider vinegar mixture, leaving a quarter inch at the top, and then use a knife to dislodge air pockets from between the jar and okra by running it around the inside of the jar.

5. Wipe rims, and screw on lids until they are secure, but not too tight.

6. Place jars back in water, and bring to a boil for 15 minutes.

7. Remove and place jars on a towel or rack to avoid the hot glass coming into contact with the cold counter, which could cause cracking. As the jars cool, a vacuum should form, and you should hear a “pop.” If properly sealed, okra pickles can be stored somewhere cool and out of direct sunlight for up to a year. If any jars do not seal, they can be stored in the refrigerator for 1 – 2 months. This is true for jars you open as well. Let jars sit for at least a day before eating.