If you are unfamiliar with the task of moving full-grown trees (and let’s face it, how many of us are?), you would have thought the job awaiting a three-person crew on Wednesday morning was an utter impossibility.

Leaning against the roof of a house in Fort Myers was a 35-foot-tall, 12,500-pound tree, a rare Copernicia baileyana or Cuban hat palm, that needed to be lifted off the ground, hoisted 50 feet into the air, moved across the yard, over the tree line, onto a flatbed, and trucked some 45 miles south to its new home, Naples Botanical Garden.

Watch the WINK news coverage of the palm’s relocation

Irma knocked it askew; we were coming to “rescue it,” as we do when we come across trees that are rare, unique, historically significant, or otherwise add value to our collections. Mark Massey of Massey Services, Inc., a tree expert who frequently assists us in such endeavors, oversaw the crew. I’m happy to report that there was no drama in this part of the tree’s tale. Swiftly and seamlessly, Mark and his team (who’ve worked for nearly a year to prep the tree for the move), affixed it to a 75-ton crane and “flew” it to the truck. 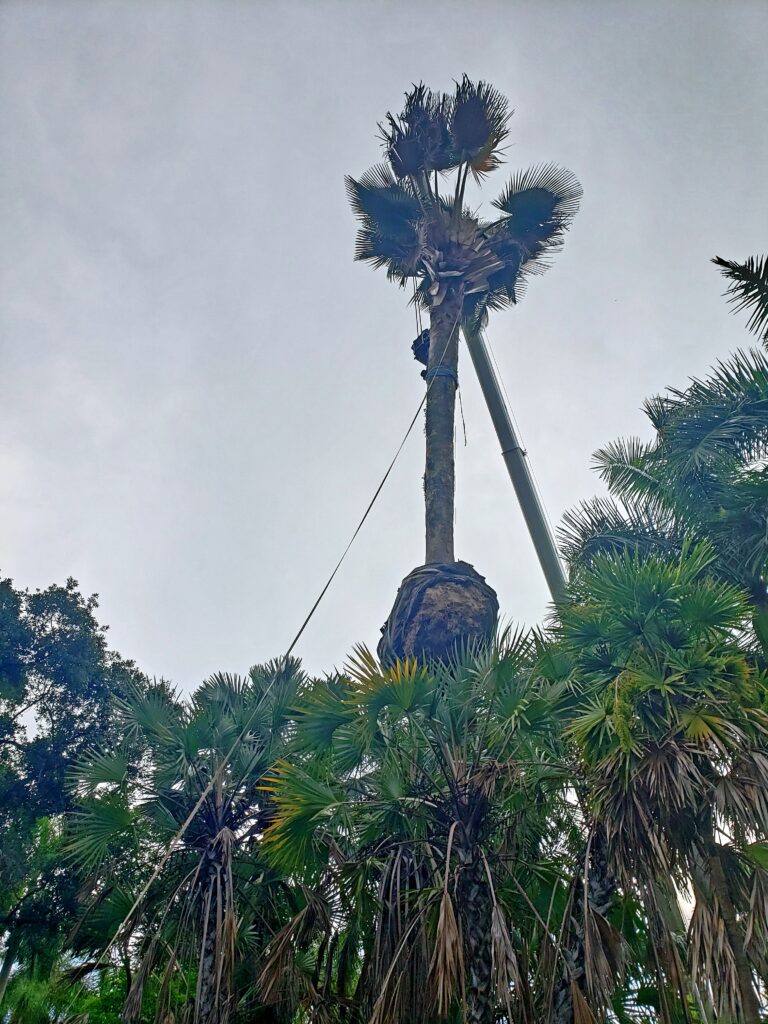 But there’s a darn good story behind the tree’s origin, and given the source, I’m hardly surprised.

The tree belongs to my friend, Liston “Lin” Bochette, a Fort Myers native who, among other things, is a former Olympian. (Now let me be clear, friends, just because you know me does not entitle all of you to special Garden services. Vice President of Horticulture Brian Galligan later will explain why Lin’s tree is such a prize).

Anyway, Lin’s an avid plantsman. On the six-lot property his family owns in the historic Edison Park neighborhood are 300 species of palms that Lin has collected during his international travels.

I’ll let him tell the story:

“I was at the (1982) Latin American Championships for All Sports, a major sporting event, 7,000 athletes. The competition was held in Cuba under the auspices of the government there. I ended up winning my event, the decathlon, and they granted me certain privileges as a government like that does,” Lin begins. He asked to tour the botanical collections of rare Cuban plants.

“The plant life was incredible, particularly the palms. Most of the trees were quite mature having been planted before the Revolution. The guide said that I could take all the seed I wanted. I collected the most rare of the endangered species in small paper cups, counted them out, and wrote down the names. Back at my room in the athlete village, I filled the sink with water and got some Clorox from the cleaning lady to disinfect the seeds. All the fruity flesh had to be removed to pass customs.”

In Fort Myers, Lin planted his botanical gems in a soil mix as close to native Cuban soil as he could manage. Here’s a fun aside — Cuban trees, like many other species from the Caribbean, really like Southwest Florida’s growing conditions.

“You know when they planted McGregor Boulevard with royal palms, the first set they planted were out of the Everglades,” says Lin, whose property runs along the historic roadway. “The Florida royal palm requires very wet soil. So, Mr. (Thomas) Edison and James Hendry (Hendry County’s namesake) sent a ship to Cuba, and the royals on McGregor are Cuban royals.” That variety is far more drought tolerant, Lin explains. The Garden, incidentally, partners with other botanical gardens throughout the Caribbean and Latin America because of our climatic similarities and shared plant palettes.

Despite our region’s favorable growing conditions, just one of Lin’s seeds — the palm — prevailed. For six years, he nurtured it in containers and then planted it in a prominent, sunny spot in front of the house. There the tree stood for some 30 years, inching skyward until Irma struck it from the east — the least-buffered side — and loosened its enormous roots. The tree sagged until it came to rest on the roof. Lin’s research indicated that the tree, if righted, would be unlikely to survive another strong storm in that same location. And so, he called the Garden.

The photos hadn’t done the tree justice, Brian said when he arrived to watch the move. It would be a perfect addition to the Scott Florida Garden, he said. There are four such palms now, flanking the stream. Raymond Jungles, the landscape architect who designed that garden, intended for there to be clusters of Copernicia baileyana as the Garden grew its collection.

“They’re very hard to acquire,” Brian says of the species. “The Garden has a pretty significant collection of Copernicia palms, especially those from Cuba. They do extremely well in the landscape. This one will really help set the others off in that area. This is just a specimen that belongs in a botanical garden.”

Lin’s tree will infuse the collection with new genetics, important for seed production. Seeds can be shared with other botanical gardens, nurseries, and other growers.

“We can protect it by propagating seeds from it, making the public aware of its importance in the world of palms, and getting it into the plant trade would be a fantastic way of saving it for the future,” Brian says.

When you visit the Garden, Brian urges, take time to look closely at the many varieties of palms, appreciate the vast diversity, and recognize the uniqueness of Southwest Florida’s tropical plant life. You can see Lin’s palm in the Florida Garden, towering over one of the chickees.

“I will miss this majesty, but I can visit it whenever I want knowing it found a great home,” Lin says before the truck pulls away.

The Garden relies heavily on philanthropic gifts to save significant trees in Southwest Florida like this palm. For information about giving opportunities, contact Vice President of Philanthropy Cindy Learned at clearned@naplesgarden.org.