Plumeria in bloom: a comeback story

“The plumeria are just starting to bloom,” began an email that landed in my inbox a few weeks ago.

We’re plant people, so such communications are not uncommon. But there was a bit of triumph in the note’s tone and way more to the story. A phone call and subsequent emails with Sandra Rigotti-Santos, our Curator of Records, revealed why this year’s blooming, which will peak in May, is particularly significant for the Garden. Our plumeria have a history, national recognition — and a comeback story.

Plumeria may be associated with the Hawaiian lei, but they originate in the Caribbean and Central America. In the late 1970s, a trio of women formed the Plumeria Society of America, a tremendous step toward popularizing the trees in the Continental U.S. Among them was the “Queen of Plumeria,” Elizabeth Thornton, famed for her 1978 book The Exotic Plumeria (Frangipani) and for her hybrids, such as the Texas Aggie, the Mardi Gras, and Thornton’s Lemon Drop.

Hetty Ford, a former Garden volunteer and avid lover of plumeria, started our collection. In 2008, when Hetty heard about Thornton’s death and her daughter’s intent to sell the collection, she asked Garden administrators to pursue acquisition. Thornton’s  daughter, Bette Gips, was happy to learn that an institution wished to safeguard her mother’s legacy (botanical gardens, after all, are akin to museums for plants), according to a blog post Ford wrote. She donated cuttings from her mother’s trees so that the collection would live on here in Naples. (Plumeria rubra — the colorful, fragrant species that Thornton specialized in — grows well from cuttings; in fact, that reproductive method is the only way to ensure the flowers’ colors and other attributes are replicated).

With the Garden now protecting Thornton’s prized specimens, other collectors, nurseries and the Plumeria Society of America began sharing cuttings from their plumeria. (See below for a list of contributors.) Hetty, elevated to Curator of the Plumeria Collection, oversaw the collection’s growth, acquiring hundreds of specimens to grow and display.

In 2011, the now-robust collection earned accreditation from the American Public Gardens Association. Our National Plumeria Collection today includes 490 taxa (each taxon is a different species, hybrid or variety) and more than 1,200 plants. In addition to providing us a rainbow of springtime blooms, the plumeria help reinforce the Garden’s connection to the Caribbean, where we’re deeply involved in conservation efforts, Sandra says. Some species found in our Kapnick Caribbean Garden, in fact, were part of a DNA study with the University of Hawaii.

But the plumerias’ story didn’t end with their national recognition.

In 2017, Hurricane Irma’s winds roared through the Garden, uprooting 300 of the 500 trees in the plumeria hills. Volunteers — led by the now-retired Hetty Ford and her husband Bruce — rushed to upright them, hoping their swift action would save the collection. But the damage had been extensive, and many were lost.

Even before the storm, the plumeria had been problematic. They had established poor root systems in the hills where we display them; some of the blooms were of inferior quality; few people explored the collection because of its out-of-the-way location and terrain. Sandra asked Stephen Brady, a flowering and fruit tree expert and adviser to the Garden, to help solve some of the plumeria’s challenges—and find a way to safeguard them from future hurricanes. He developed a rating system and proposed taking cuttings from the best of the trees and growing them in tubs to be placed close to the walkway for guests to better enjoy.

“Growing them in the tubs would start the process of ‘dwarfing’ the plants, allowing them to display the flowers at eye and nose level — yes, we like to check the fragrance of flowers!” Sandra explains. “The plants in tubs would improve efficiency on irrigation, pest and disease treatment, fertilization, and overall care of the plants.” The staff also wants to investigate forcing a winter bloom so that more guests could see the plumeria at their peak, a process easier to perform on smaller, more accessible trees, Sandra adds.

With assistance from a team of volunteers, Sandra and Steve made cuttings and graftings of every tree in the plumeria hills to back them up in the nursery.  Many of them succeeded and became new plants. Ninety-five of them are now displayed in the tubs; ultimately we hope to have 400 growing in them, Sandra says.

What she’d spotted recently — and what prompted her initial email—was this: Two Plumeria rubra made from the post-Irma cuttings—’Col’s Cooktown Sunset’ and ‘Lillian K.T. Chinn’ — are blooming for the first time in the tubs. The sight offered a welcome affirmation. “It’s going to work!” Sandra says of the collection’s revival.

Ah, but the plumeria continue to challenge us. The tubs are filled with Stalite, a lightweight aggregate similar to the soil in the Caribbean where the species originates. This is a practical way to grow the plants but not the most aesthetic one. To make up for the rather stark appearance of tiny trees, oversized tubs and gritty media, the Horticulture team planted purslane (Portulaca), a flowering groundcover, to add beauty and interest. Once they bloomed, the purslane certainly appealed — to the deer especially! As a replacement for the ravaged flowers, the gardeners planted another ground cover, Asiatic jasmine (Trachelospermum asiaticum), which is expected to cover the Stalite and cascade down the tubs.

With the trees’ spring blooming, it looks like our National Plumeria Collection may indeed be on a road to full recovery. We’re sorry you can’t see the collection in person at this time, but Sandra and gardener Lauren Hardy have provided these images in the meantime. Enjoy! 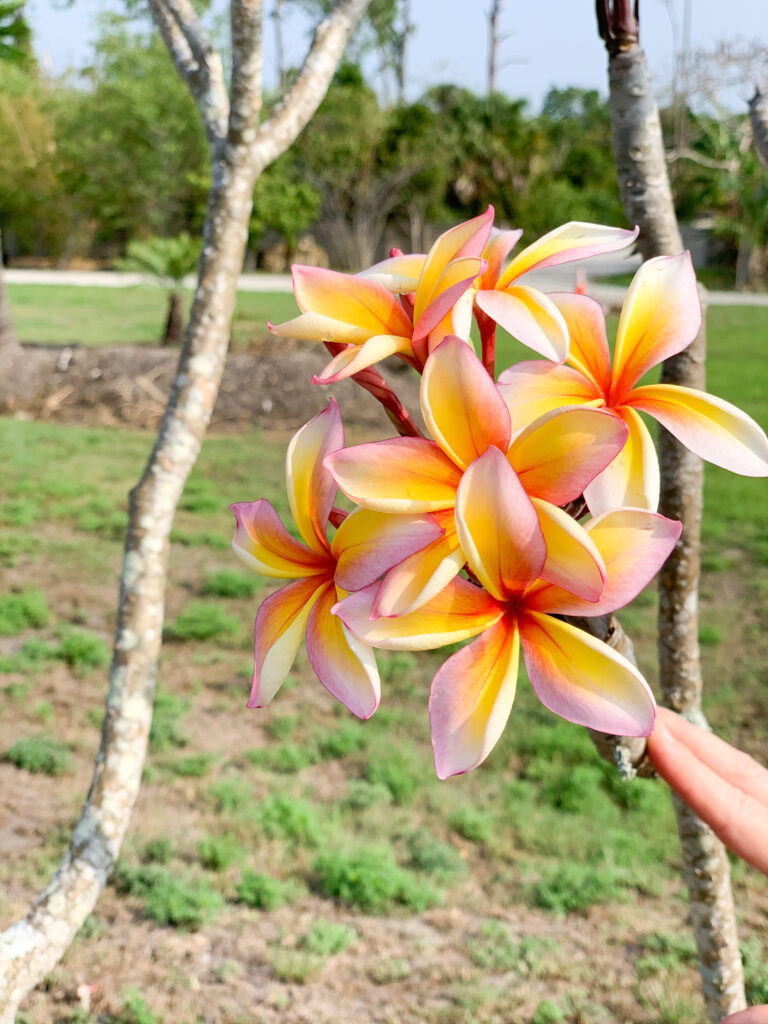 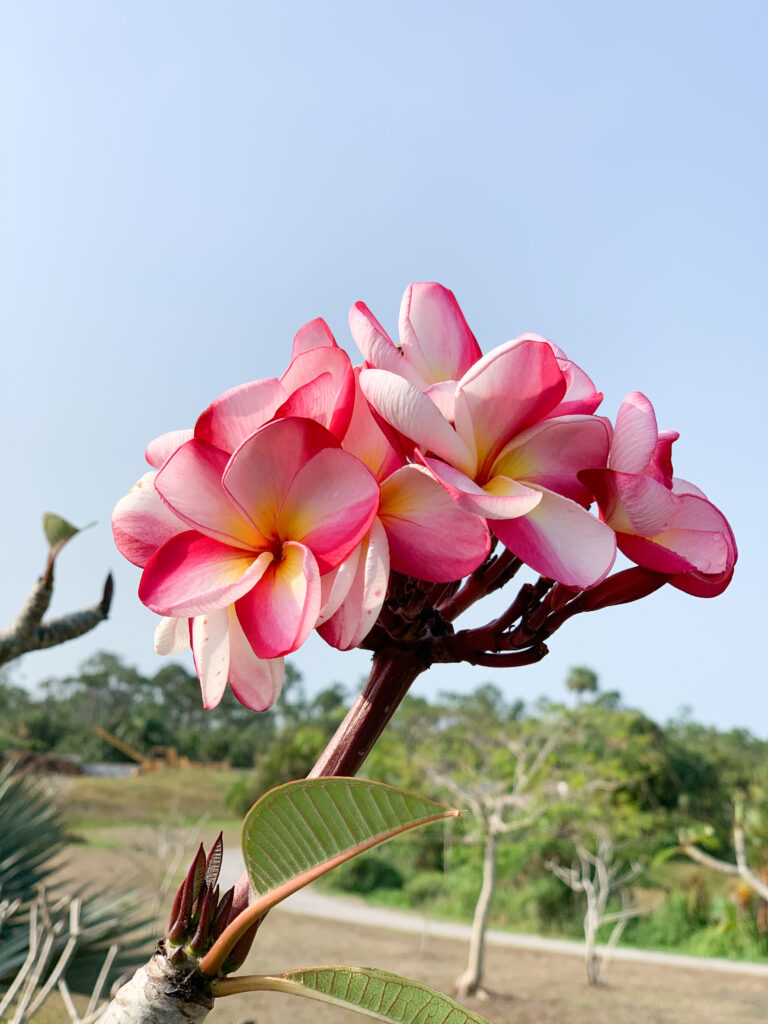 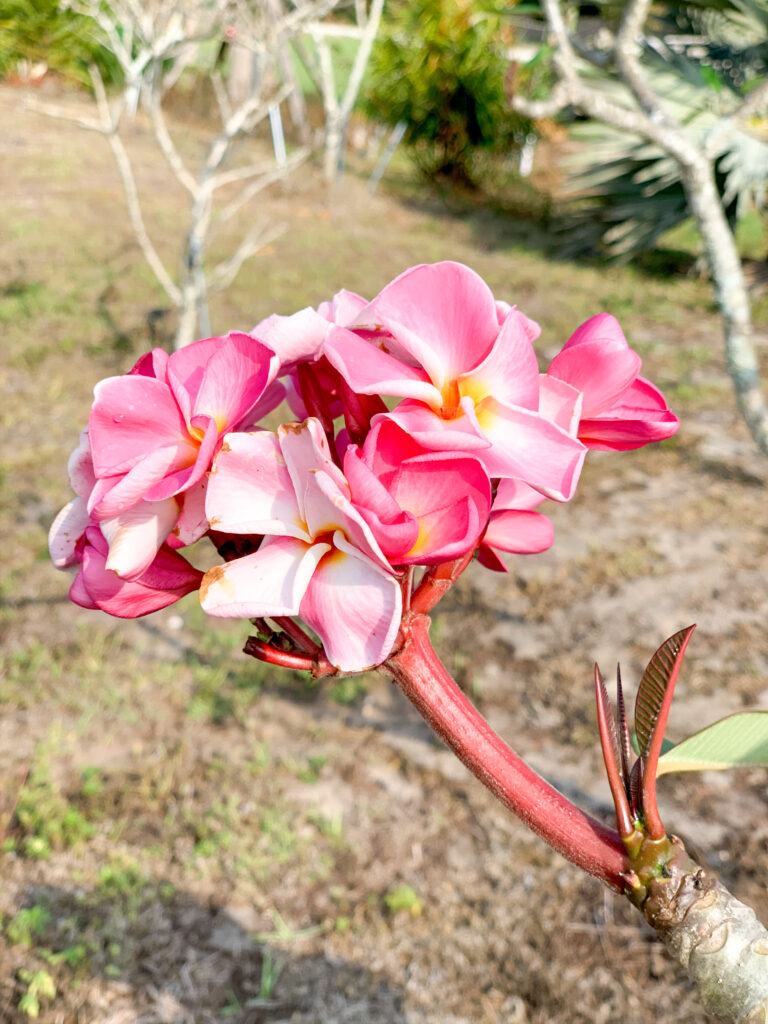 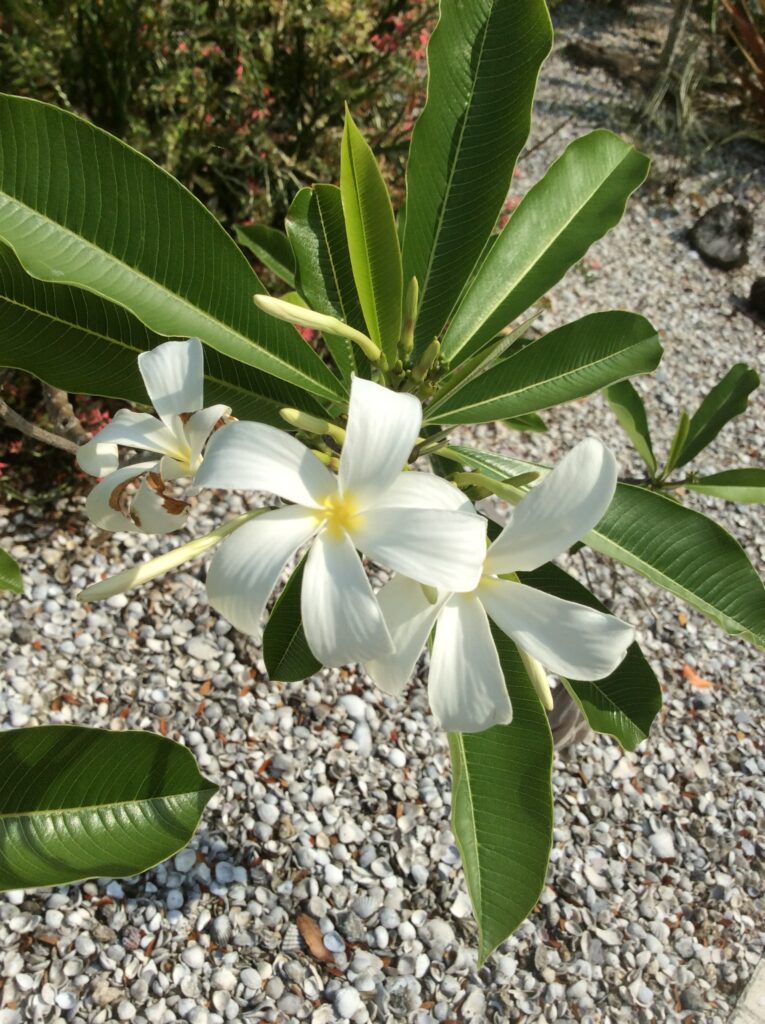 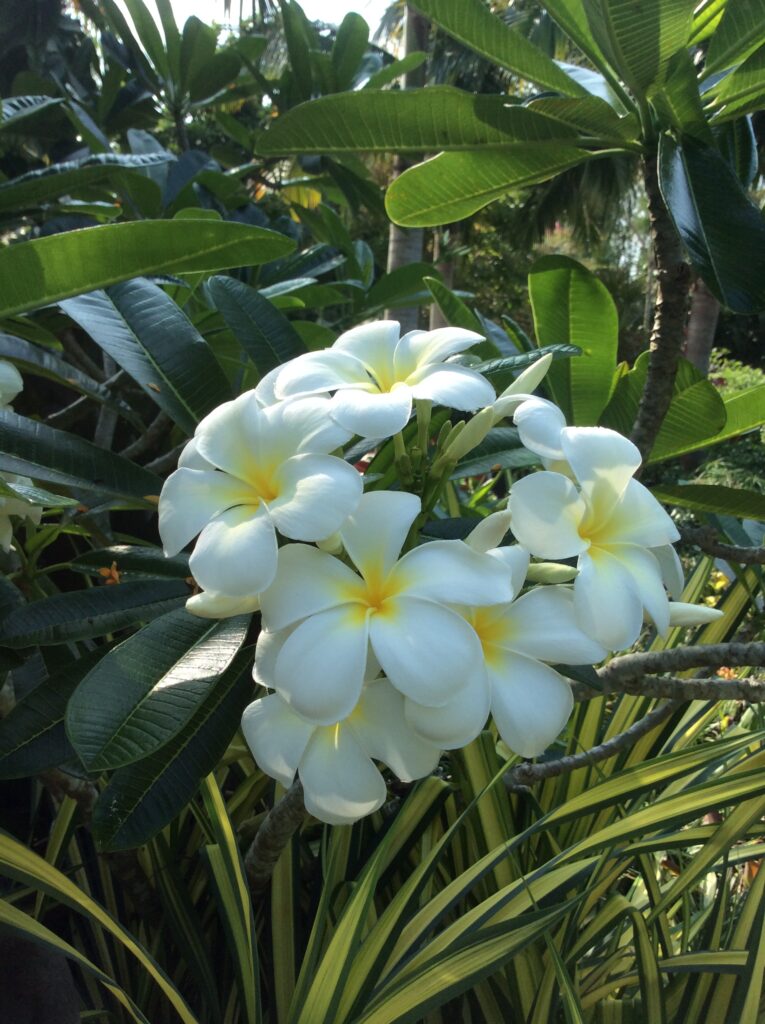 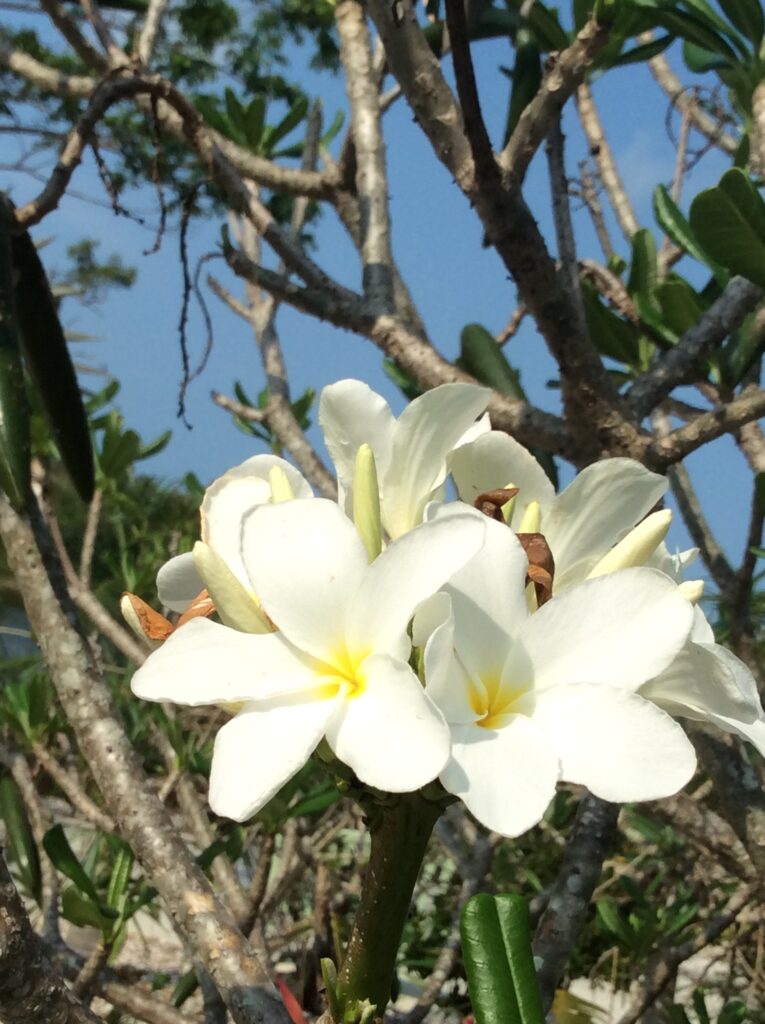 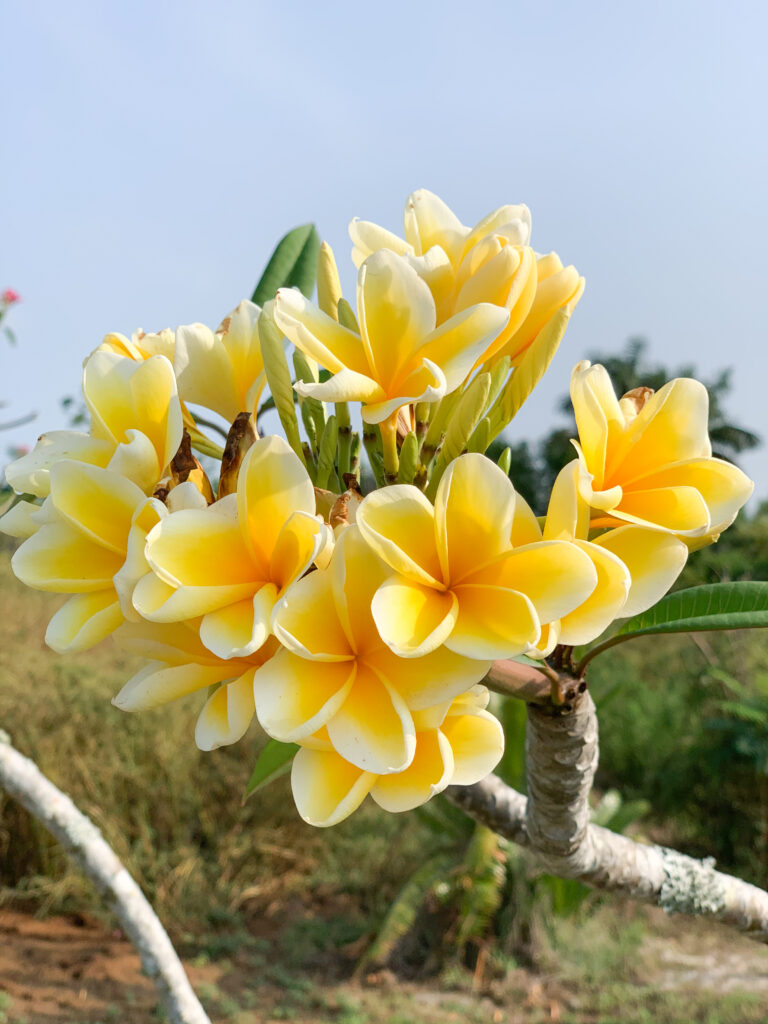 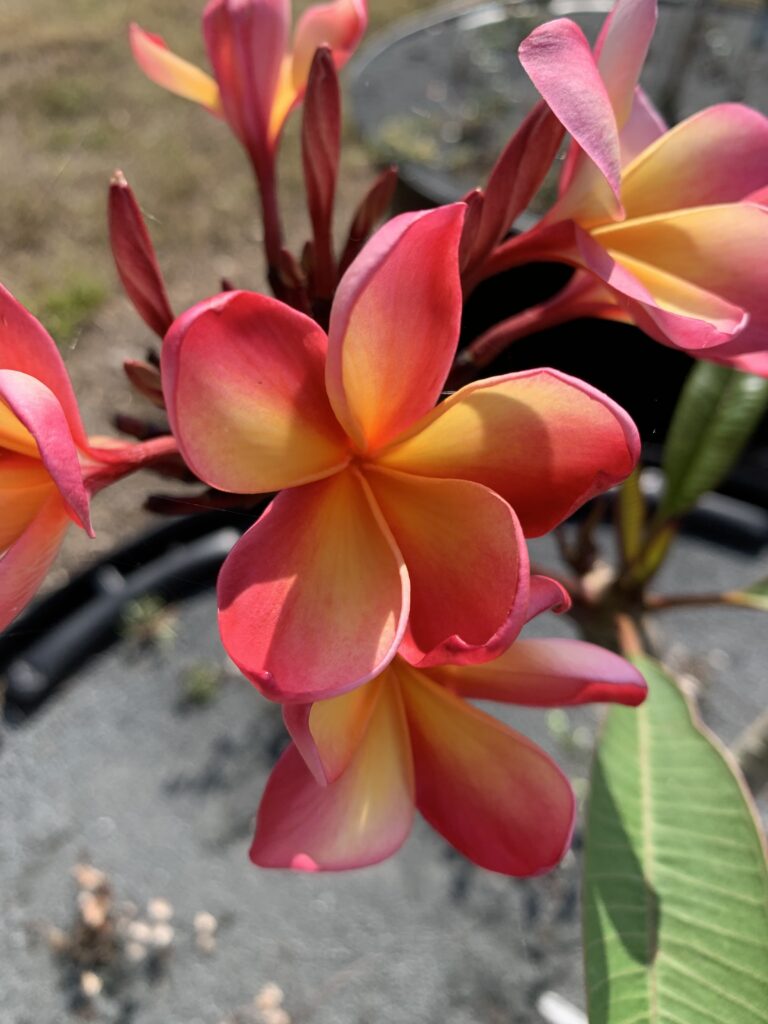 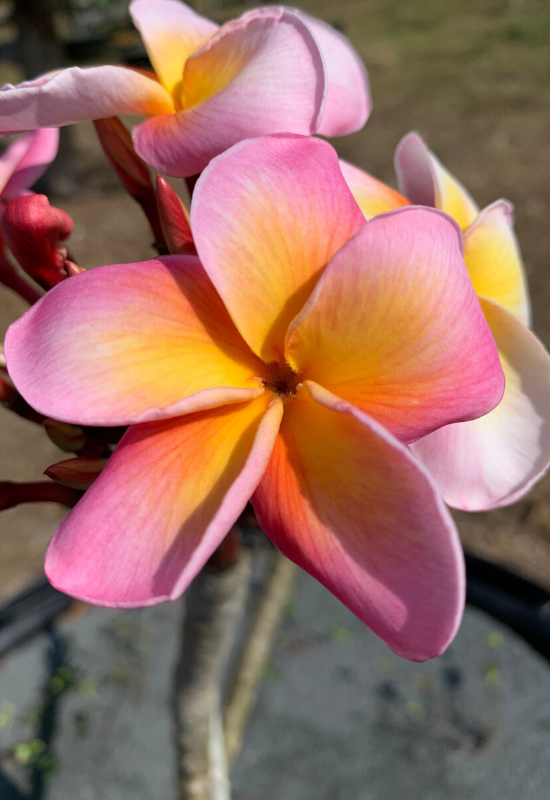 Contributors to our National Plumeria Collection

The figures represent the number of “accessions” we received from each donor. An accession is the registration number of a single or group of one type of material (cuttings, seeds, fruits, plants) of the same taxon, received from the same source on the same date.