Mystique in the Water

When Longwood Gardens, the world’s largest producer of giant water platters, began renovations on its waterlily pools, it turned to Naples Botanical Garden for help. Here’s more on our journey of hand-pollinating these colossal plants.

On an overcast morning last August, the Water Garden’s boardwalk feels a little bit like an operating room.

“It looks like there could be some there,” Jennings says. He swirls a paint brush around the flower’s middle and inspects the bristles for further evidence. Convinced that there could be, the pair don boots, wade through water, and insert the stamen into another bloom still affixed to its pedicel or flower stem.

A new collaboration charges Naples Botanical Garden with generating seeds of the Victoria waterlilies, giant aquatic plants that are among the botanical world’s most alluring specimens. Longwood is renowned for its seasonal Victoria displays — and for producing and germinating seeds to maintain its collection and share with botanical gardens around the world. But Longwood’s lily pools are closed for renovations for the first time in its 65-year history. To ensure that adequate seed is produced during the renovation period, Longwood horticulturists turned to our Garden for help.

Under a three-year agreement, Naples will produce seeds of the Victoria amazonica, Victoria cruziana, and the Longwood hybrid, a cross of the two. The partnership will ensure these magnificent plants remain a viable part of botanical collections. The collaboration runs through 2024 and may evolve into further opportunities beyond that.

It’s a project both gardens have embraced — a chance to observe seed production in a new setting with a longer growing season, an opportunity for botanical detective work and troubleshooting, and a venture that brings together a legacy garden with an adolescent one.

“I never thought that within 15 years we’d be working with one of the greatest gardens in the world,” says Naples Vice President of Horticulture Brian Galligan.

Longwood horticulturists began growing and displaying Victoria waterlilies in 1957 and became the first to successfully hybridize the two species in 1961. In the decades since, they have shared the Longwood hybrid with more than 140 botanical gardens around the world.

“Our partnership with Naples Botanical Garden is enabling us to continue the seed production of Victoria amazonica and Victoria cruziana while our own waterlily display is on hiatus,” explains Longwood Gardens Vice President of Horticulture Sharon Loving. “Together, we are ensuring that these amazing plants can continue to grow and thrive at public gardens around the world.”

Native to South America, Victoria waterlilies were first shared with the wider world in the early 1800s and have captivated their audiences since. Thaddacus Haenke, the first botanist to systematically explore South America, is believed to have been the first non-indigenous person to spot them during his 1801 exploration of the Mamoré River, a tributary of the Amazon. In 1835, another botanist, Aimé Bonpland, sent the water platter’s seeds to the head of Jardin des Plantes in Paris. He had no idea if they had reached their destination until his 1849 visit to the Brazilian city Rio Pardo where he spotted illustrations of Victoria waterlilies on ladies’ fans and in Britain’s Penny Magazine and The Illustrated London News.

Meanwhile, German botanist Robert Hermann Schomburgk stumbled upon the giant lilies while on a British-sponsored expedition through Guyana. He sent notes, drawings, and samples to the Royal Botanic Gardens, Kew, where botanist John Lindley established that they belonged in their own genus. Lindley in 1837 named the species Victoria regia in honor of Queen Victoria. (Longwood Curator of Plants Tomasz Anisko documented the plant’s full history in his 2013 tome Victoria the Seductress: A Cultural and Natural History of the World’s Greatest Water Lily.)

The plant’s size alone awes its spectators. In cultivation, lily pads of the V. amazonica, the larger of the two species, span some 6 to 7 feet with 15-inch blooms. The more cold-tolerant V. cruziana is slightly smaller with a pronounced lip around the pad’s edges. For both species, as well as the Longwood hybrid, new pads emerge like closed fists and unfurl to those great expanses.

Beneath their surface-level beauty, these waterlilies are fierce: Razor-sharp prickles cover the stems and the undersides of pads, warding off predators. The plants’ structure is an architectural feat: A lattice of ribs support the pads, which can hold an inordinate amount of weight — 65 or more pounds on mid- to larger-sized pads. Air trapped within the ribs enables the pads to float.

The plants, in fact, inspired 19th-century architect Joseph Paxton, who reportedly based his design of London’s Crystal Palace, built in 1851 to house the Great Exhibition, on the underside of a Victoria pad. The 128-foot-high structure was composed of more than 1,000 iron columns and 900,000 square feet of plate glass.

The flowers are just as intriguing. On their first night’s opening, they are white, emit a fruity fragrance, and generate a surprising internal heat. The warmth and the scent attract their pollinators, scarab beetles. The blooms turn pink on their second night and begin producing pollen. Thus, when horticulturists such as Cahill and Jennings pollinate by hand, they take the pollen from a second-night bloom and insert it into a first-night one.

Not everyone can grow Victorias, particularly V. amazonica. Perhaps that’s part of the reason they maintain their mystique.

For starters, V. amazonica seeds can be difficult to germinate. Longwood is one of a handful of botanical gardens and aquatic nurseries to successfully do so, ensuring both the species and the Longwood hybrid continue to persist. The seeds have a short shelf life; V. amazonica seeds harvested during one season must be used during the next. Germination rates vary from 20 to 40%, and an even smaller number grow to maturity.

Seed production in Naples was sluggish at first. By the first week of November 2021, Cahill had produced some, but not nearly what she had hoped for. Jennings generally performs 18 to 20 hand pollinations each year, which yield between 50 to 100 seeds a piece, giving him a seasonal harvest of 1,500 to 2,000. Cahill, whose pollination window is much longer due to our climate, had produced three bags with 15 to 20 seeds a piece. Two other bags had failed.

“It’s a learning process,” reassures Jennings, who is at the Garden checking on progress. Cahill had followed the pollination protocols correctly, he confirms. There are lots of variables to consider — the water’s depth, acidity, and temperature; sunlight levels; soil differences; pollen viability.

“We’re going to just test as many variables as we can,” Jennings concludes.

They didn’t need to undertake a full-blown botanical investigation because two months later, Cahill announces: “It’s a slam dunk!” She had started staking the seed pods to keep them from floating away from the parent plant, a step that seems to have helped turn the tide. Beyond that factor, she’s not sure why the plants suddenly started producing.

By the end of December, Cahill had amassed 864 V. cruziana seeds, 75 V. amazonica ones, and 391 of the hybrid. This year, she and Jennings will standardize some variables, such as pots and fertilizer, to better guarantee production. They decide to house the Victorias used for seed production in the upper portion of the Kapnick Brazilian Garden, the pond by the Burle Marx Mosaic. It’s nearly as deep as Longwood’s pools and offers the greatest hours of direct sunlight. Longwood heats its pools, while we do not.

“Germination happening!” she exclaims in a text message, accompanied by a photo. In her office, a few pea-sized V. amazonica seeds sprout spindly roots. They were seeds from Longwood not Naples, but cause for celebration, nonetheless. Cahill will continue trying to coax V. amazonica seeds from plants grown in our Garden to germinate this year.

“Tim and I both are completely captivated by these plants,” she says. “They’re hypnotic, they’re enormous, they’re finicky, they’re dangerous. All these years later, they’re still exciting. They just keep fascinating me.” 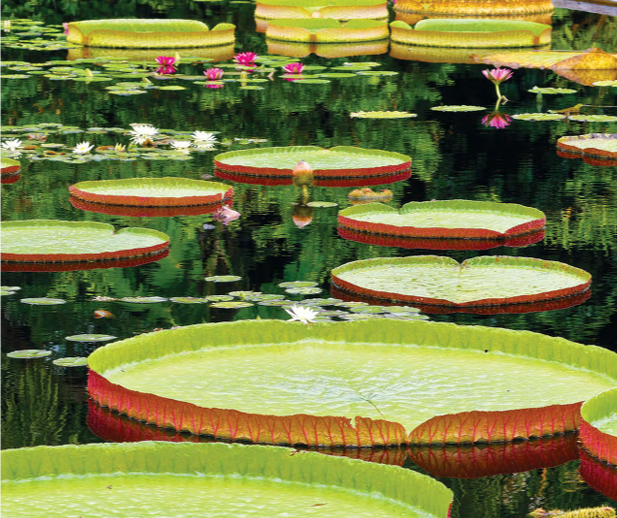 The Victoria waterlilies will be on display starting this summer and will remain in our water features through the rest of the calendar year. In the upper Brazilian Garden pool, guests can observe V. cruziana on one side, V. amazonica on the other and at least one hybrid in the middle. Guests this summer and fall may catch Cahill in the act of hand pollinating in early mornings or see evidence of her work in the form of white bags encasing newly pollinated flowers. More Longwood hybrids will be displayed in the lower Brazilian pool, and the Water Garden will feature additional V. cruziana.

The plants evolve quickly. Visit often, and you can witness the blooms transform from white to pink, and observe the pads expand into the massive platters that inspired botanical expeditions of the past and continue to amaze audiences in the present.

This article originally appeared in the Spring/Summer 2022 issue of Cultivate, the Garden magazine.